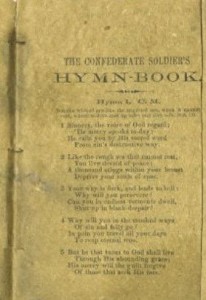 It is a bold move at a time when the war has obliterated Southern Baptist mission efforts apart from work among Confederate soldiers. The production of literature, in short, has become the best that Baptists of the South can realistically do well in the present circumstances. Essentially an outgrowth of the Southern Baptist Theological Seminary, Basil Manly Jr. (Old Testament professor) and John A. Broadus (New Testament professors) serve as editors, working out of their homes.

Charles J. Elford serves as the Board’s first director and operates the printing press, which is located on “the east side of the old Liberty Life Building at Court and Main Streets.” The press is located in the basement of the building and produces “some of the earliest releases of the Sunday School Board.”

The earliest publication of the Board is The Confederate Sunday School Hymn Book, a volume that includes 137 hymns. The initial printing is 3000 copies, apparently, in conjunction with the South Carolina Baptist Convention. A second edition in 1864 prints 10,000 copies.

The Board survives the war but dissolves in 1873 during the travails of Reconstruction and against the backdrop of competition from Northern Baptist publishers (which remain popular among Southern Baptists despite the war). By the end of the century, Southern Baptists are in the Sunday School board business for the long term.