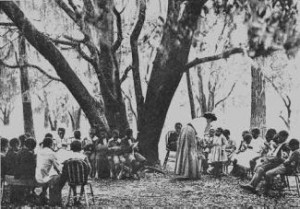 Today at Concert Hall in Philadelphia a meeting is convened by the Pennsylvania Freedman’s Relief Association, an organization supported by many Northern Baptists, “to take into consideration the condition of the freed people of the South.”

Speaker after speaker offer positive reports on the strides made to emancipate slaves and educate and acclimate freed persons to a life of freedom. Special attention is given to the Port Royal experiment off the coast of South Carolina, a resettlement of freed persons (a large number of whom are Baptists) on former plantations, the efforts of which include education, job training, and the promise of land ownership.

A few of the words offered concerning Port Royal are as follows:

Port Royal has also brought to light a great wealth of resource possessed by the country, in the character and capabilities of the black man. That the blacks will work, without the whip, quietly, industriously, and that for the merest modicum of wages, the most reluctant are now compelled to admit. That they will fight, with the same bravery and the same skill as white men, and that they may be relied upon as defenders of our common country in time of war, has been made equally patent. Gen. Hunter’s black regiment of South Carolina, were the first to put this fact beyond a peradventure. That they are susceptible to educational influences, the Port Royal enterprise has also placed beyond the possibility of cavil. Read the published testimony of teachers who have gone out from this city. Read the letters of that most accomplished and devoted lady, Miss Laura Towne; or those of the equally accomplished and devoted Miss Charlotte Forten, granddaughter of the late James Forten, of this city ; or those of the estimable Mrs. General Saxton, formerly Miss Matilda Thompson, who went to South Carolina under the auspices of our Philadelphia Relief Committee.

But I need not multiply illustrations of what has been developed by this great Port Royal movement. Suffice it to say, its history constitutes one of the most instructive chapters in the annals of our country.

It is a chapter that has been read, studied and reproduced in England and France, and that with the greatest advantage to our national cause, and to the cause of popular liberty everywhere.

What if there be “35,000 freed people on the banks of the Mississippi” looking to us for aid? What if there, and elsewhere, this number be increased, as it soon necessarily will be, tenfold? The more of them the better. The sooner they are all free, the sooner will the war be over; the sooner will the rebellion be suppressed, permanent peace restored, and the work of our national regeneration complete.

The question of slavery or freedom for blacks is indeed the question of the war. A Union victory must entail freedom for all blacks, whereas a Confederate victory by necessity will involve the maintenance of the South’s slave-based society, culture and economy.

The scales are now tipping toward freedom for all blacks, but the Confederacy is far from conceding defeat at this point.

Source: “Report of the proceedings of a meeting held at Concert Hall, Philadelphia: on Tuesday evening, November 3, 1863, to take into consideration the condition of the freed people of the South” (link)