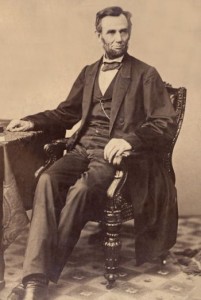 On this Sunday in Washington, D.C., U.S. President Abraham Lincoln poses for a new photograph. The president’s Gettysburg Address is merely one week distant. The growing toll of death weighs heavily upon the man.

In California, a fire ravages Nevada City. Fires are a frequent occurrence in western towns due to the predominance of wooden structures. One of the few buildings surviving today’s blaze is the meeting house of the First Baptist Church. Members are especially grateful, as the original meeting house had burned in 1856–one year after being built. It had taken four years to rebuild after that fire. Having suffered through such tragedy previously, the Baptists today gladly make their meeting house available for members of other congregations who were not so fortunate.

Meanwhile, some Southern Baptists in Georgia before or after worship services are talking about an editorial in the current edition of the Georgia Baptist Christian Index. Written by an anonymous pastor, the editorial rails against the evils of theater, a form of entertainment increasingly available to many urban Baptists of the Confederacy. “Is it right for church members to attend them?” the editorial rhetorically asks.

The mature, pious and spiritual christian will answer this question in the negative; but there may be those who have enjoyed less of the blessed experience of God’s grace in the heart, who may consider it no offence against “pure and undefiled religion.” For the benefit of this latter class, I propose to state a few reasons.

First–It is an injury to your own religious enjoyment.

“Keep they heart with all diligence for out of it are the issues of life.” But who can thus keep the heart at a Theatre?

“Watch and pray least ye enter into temptation.” Then spoke the blessed Redeemer when he sent forth his disciples as “sheep among wolves.” Does or can the church member in the theatre obey these important words of Jesus? None have done it; it may therefore be justly said none can do it. And yet your Saviour says, “Men ought always to pray and not to faint;” but theatres restrain prayer, they destroy the spirit of prayer, and fill the mind with frivolity and a love of dissipation.  These emotions disqualify the heart from worshiping God “in spirit and in truth.”–Hence the christian loses the blessedness of communion with God, which is the source of religious enjoyment. “He that knoweth to do right and doeth it not, to him it is sin.” “He that knoweth his Master’s will and doeth it not, shall be beaten with many stripes.”–Those who “hunger and thirst after righteousness,” those who “pant after God,” and those who are persuaded by a desire for the “love of Christ in the heart,” will find Theatres to be most destructive of all the good they desire. “Avoid every appearance of evil.” “Be not conformed to this world.” “Be ye holy, for I am holy.”

Second–It is injurious to your christian character and influence.

Public sentiment is convinced that Theatres are irreligious places, unfit and inappropriate for christians. Though this sentiment is never expressed in so many words, yet it is felt in the heart, and not unfrequently destroys confidence in the sincere piety of those who attend.

The moral renovation of the world, under God, depends upon Christianity. The power of religion to correct the errors of the world is derived instrumentally from the individual members. “Ye are the light of the world–let your light so shine before men that they, seeing your good works, may glorify your Father which is in heaven” But your “good works” are not “seen” at the Theatre; they are not performed there–your “light” does not “shine” there, but becomes darkness.

Your presence encourages sin in the wicked, and less instructed disciples. Your example is plead in justification by others, and pointed at in derision by the worldly who heard your solemn vow of fidelity  when you joined the church. Your profession of religion is believed to have been made from sinister motives, and you are judged as a hypocrite for violating the principle of fidelity you have so solemnly made to Christ and the church. This reproach is shared not less by you, than by the church of which you are a member. You are shorn of your moral influence, the church is deprived of whatever assistance you might have been able to exert, your heart is deprive of the “joy of God’s salvation,” and Christ is “wounded in the house of his friends.”

Reader, are you a christian? Have you made vows of fidelity to Jesus? Have you a hope of heaven? Do you prize a crown of life? Do you desire the salvation of the lost souls of your friends? Do you love the church and the precious Saviour? Would you please your Redeemer? Then, by all these holy and sacred affections and obligations do not attend the Theatre.

“There is a way that seemeth right unto a man, but the end thereof are the ways of death.”

African slavery is fine with God, but attending the theatre is not. Such is the theological mindset of many white Southern Baptists.