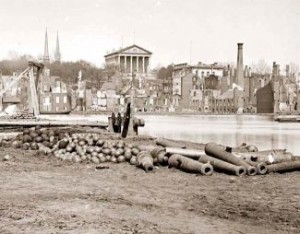 This week Richmond’s Leigh Street Baptist and several other city churches devise a plan to help care for poor citizens of the Confederate capital city during the coming winter months, as reported by today’s Richmond Daily Dispatch.

Our readers will be glad to see that suitable efforts are being made to take care of the poor of Church and Union Hills this winter. The charitable associations of Richmond have heretofore done a great deal for this people, but they now have their hands full within the city, and can do but little outside.

On Monday night last, the pastors of St. John’s, Trinity, Leigh Street Baptist, Union Station, and the 3d Presbyterian Churches, held a meeting for perfecting a plan which they had been privately considering for several weeks, to supply their poor with the necessaries of life the ensuing winter.

The meeting organized by calling Mr. Miles Turpin to the chair, and appointing as Secretary Mr. Ro. E. Richardson.

After a fervent and eloquent prayer by Rev. Dr. Edwards, the plan agreed upon by the ministers was submitted, discussed at length, and adopted.

On motion, a resolution was adopted requesting the ministers of the several denominations there represented to take up collections at an early day for the cause in which they were engaged.

The plan of organization being too long for our crowded columns this morning, we merely give a synopsis of it, hoping that it may serve as a basis for other societies of a like nature:

2d. The object of the Association.

3d. Defines the limits of its operations.

4th. Provides for the officers: President, Vice-President, Secretary, Treasurer, and five Directors (one from each church). The pastors of the different churches to be ex. officio Directors. The whole “to constitute a Board of Managers, to whom shall be committed the sole direction of the practical workings of the Association.”

5th. Prescribes the duties of the officers, and how the funds shall be paid out.

6th. Designates the localities embraced in the limits of the operations of the Association; to be subdivided into small districts or wards, and committees appointed by the Board to canvass each district and get the names of all who are deserving of charity; to record the name, residence, and condition of each dependent family, and to report the same.

7th and 8th. States the powers and duties of the Board of Managers, giving them authority to raise money, &c., and states the duties of the Treasurer.

Properly managed, this Association can do a vast deal for the relief of the poor, and especially the families of our noble soldiers.

Even with help from local churches, the suffering of the capital’s lower class grows worse in the months ahead.