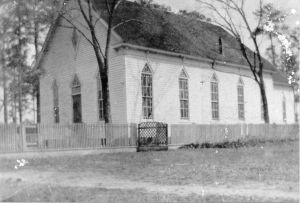 Revival season continues among Southern Baptist churches, as reflected this week in a letter to the editor of the North Carolina Baptist Biblical Recorder.

Mr. Editor–Yesterday we closed one of the most interesting meetings that we ever attended at Bethel church. We protracted our monthly meeting from day to day until the 10th day, the result of which is about 50 conversions, 10 of whom are colored ones. Our congregations were very large, attentive and well behaved, and every thing seemed to indicate that the Lord was especially gracious. May the Lord carry on His good work in our land until this war shall be converted into a gracious, heavenly peace. I had the assistance of Elder Levi Andrews.

Black conversions in white-dominated churches are not unusual during this revival season. Slaves, however, are hopeful of bodily salvation as much as spiritual salvation … and convinced that freedom of both body and soul is God’s design for humankind.

As such, black and white Baptists in the South have totally opposite definitions of what the Lord’s “good work” in their land would look like in terms of the war’s outcome.

Ultimately, only one Baptist vision can prevail.