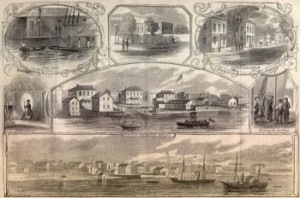 Today’s annual meeting of the Erie Baptist Association of New York echoes many other Northern Baptist associations this fall in terms of expressing support for emancipation of slaves and the war against Southern slavery.

One Erie Baptist resolution succintly summarizes the association’s beliefs in terms of war and slavery:

Resolved, That we have special occasion for thankfulness to God, in the emancipation last January, of nearly three millions of our fellow men from bondage, and still another such occasion in our recent National victories.

The war to eradicate African slavery is going well by some measures. Tens, perhaps hundreds, of thousands of former slaves have been liberated, and hundreds are escaping to freedom daily as the Union Army continues its relentless, albeit slow, push into the Deep South.

As many as 20,000 former slaves are now living in freedom along the Union-controlled South Carolina coast, in an area that prior to the war was known for some of the grandest and richest plantations in the South. Now, under the protection of the Union Army, former slaves who once tilled the fields occupy the expansive plantations that previously housed their masters.

The town of Beaufort is the center of the area, and today in Beaufort the African American Tabernacle Baptist Church is officially organized. The Rev. Solomon Peck of Boston, Massachusetts officiates in the church’s founding. The church is named after the building in which the meeting takes place, an old structure owned by the Beaufort Baptist Church, a historically prominent white-controlled church now housing a huge African Baptist congregation.

Some 500 freedpersons transfer their membership from the African Beaufort Baptist Church to the Tabernacle church. Tabernacle Baptist becomes the church home of the now-famous former slave and war hero Robert Smalls, and is still in existence to this day.