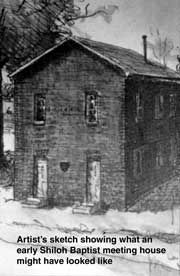 Fredericksburg, a Virgina city on the banks of the Rappahannock River, has served as a crossroads for both Confederate and Union armies. Confederate forces controlled the city early in the war, only to give way to Union forces in the spring and summer of 1862. The four months of Union occupation were tenuous, leading federal forces to provide protection for the city’s slaves and free blacks, including offering opportunities for slaves to escape to the safety of the North. Many slaves escaped to Washington, D.C., as the United States capital had, in April, emancipated the city’s slaves and removed former restrictions placed on blacks. Accordingly, Washington’s black population grew dramatically as escaped slaves by the thousands relocated to Washington.

During the Union occupation of 1862, about four hundred members of Fredericksburg’s Shiloh Baptist Church were among the many refugees who relocated to Washington. Several members of the church reunited, and soon Sunday school classes, worship services, prayer meetings and lessons in reading and writing for the ex-slaves were organized (in Virginia, teaching slaves to read and write had been unlawful) in homes. In the months ahead, the freedmen, while longing for their old church, strove to make the most of their new home.

Having formed the church, the founders sent communication to the various Baptist Churches in the city and received a positive response for recognition from three white churches, the First Baptist Church, Calvary Baptist Church, and the E Street Baptist Church later called the Temple Baptist Church. On September 23, 1863, delegates from the aforementioned churches met at the First Baptist Church in order to convene a recognition council. Dr. G.W. Sampson, pastor of the First Baptist and also president of Columbian College (now George Washington University) served as the council moderator with Rev. John S. Poler of the E Street Church as clerk. Shiloh founder Henry Frazier, senior deacon of the newly-formed church, presented the council with historical facts, augmented comments from William J. Walker. Walker stated “These brethren, who have been driven from their homes and scattered among strangers, long to be gathered into a church that they may worship unitedly as they formerly did.” Afterwards, the council unanimously adopted the resolution:

That we heartily approve the proposition of the brethren to be recognized as a church, based upon the Christian doctrines and principles which are the foundation of our denomination, and that we will cheerfully cooperate in the services appropriate — the recognition of the Shiloh Baptist Church of Washington, D.C.

The council then examined William J. Walker to ascertain his qualification for the ministry and minister finding him acceptable, recommended his ordination.

On Sunday, September 27, 1863, the {council} again convened at the First Baptist Church for his ordination service. The proceedings related that “Dr. Sampson gave an instructive and deeply interesting charge to the Rev. Mr. Walker.” The service closed with the singing of the hymn, “Blest Be the Tie That Binds.”