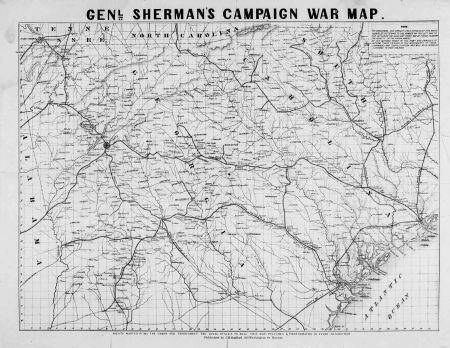 In the Atlanta Campaign’s Battle of Utoy Creek, begun on August 4, a Union offensive attempts to seize the railroad between East Point and Atlanta. The rail lines represent the Confederate’s supply route.

Infighting among Union officers, however, provides Rebel defenders time to better entrench in anticipation of the Union attack. Unable to overpower the Confederates, the Union offensive sputters to a stop today, following small advances in the days prior. With the battle technically ending in a draw, Atlanta is spared another day from capture by the Union.  Nonetheless, the siege continues and the Union threat is no less real now than it was prior to the Battle of Utoy.

As has been the case in many battles fought in the war thus far, a Baptist church is caught up in the fighting in the Battle of Utoy.

The Utoy Primitive Baptist Church meeting house, the oldest Baptist church in Fulton County, serves duty as a hospital housing dozens, perhaps hundreds, of injured soldiers. Enemies when fighting but comrades when injured, both Union and Confederate soldiers are treated in the church buildings and on the church grounds of the Utoy meeting house. The attending physician, Dr. Joshua Gilbert (1815-1899), is none other than Atlanta’s first doctor.

Dozens of men who die during the battle or from injuries afterward are buried in the Utoy Cemetery, the oldest cemetery in Atlanta. Following the war, in 1866 the Union dead are removed to the National Cemetery in Marietta, while the Confederate dead, some thirty graves, remain to the present day.

The Utoy Primitive Baptist Church no longer exists, but the cemetery is preserved and is in process of being placed on the National Register of Historic Places.