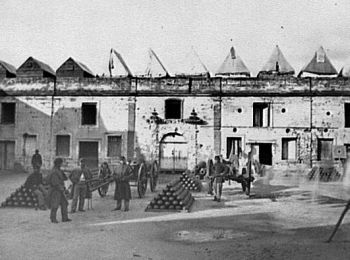 St. Augustine, Florida has been under Union control since March 1862. Along with Beaufort, South Carolina and environs, St. Augustine serves as a Northern-controlled freemen’s colony, providing opportunities for former slaves — or contrabands (the wartime term for slaves freed by the Union Army) — to receive basic education, learn trades and acquire farming skills.

Leading the efforts in St. Augustine is Rev. Issac. W. Brinckerhoff, a Baptist preacher from New York who has devoted his life, leaving his family in New York, to fulfilling his personal conviction that freedom is God’s will for all persons. A former employee of the American Tract Society, Brinckerhoff was appointed in March 1862 to the position of Superintendent of Contrabands, tasked with the education and spiritual care of freedmen through the National Freedmen’s Relief Association at Beaufort, South Carolina. Transferred to St. Augustine in February 1863, the Baptist pastor ‘s responsibilities remain the same. In his spiritual capacity he works with Methodists and Presbyterians, in addition to Baptists (the latter being the most common faith among freedmen).

During Brinckherhoff’s tenure, other Northern missionaries have arrived in St. Augustine to assist with the educational and spiritual work among the freedmen and Union soldiers. One recent arrival is Rev. George Greeley, a Methodist minister, appointed by the nondenominational American Missionary Association to work among African Methodists.

Greeley, however, has found his intended mission temporarily thwarted by the local (white) Methodist minister. Accordingly, Greeley and Brinckheroff have divided amongst themselves ministerial duties among Union soldiers and freedmen, with Greeley also teaching part time.

Today Greeley writes a letter in which he speaks of the ministerial situation in St. Augustine.

I have now been here just one month in the heart of summer, and thus far, my expectation of the effect of this climate on my health is fully realized and I think it will continue to be, if I stay the year round. I preach twice every Sab. and [..?..] at the Sab. Sch. and perform the usual amount of labor during the week; yet my health improved all the while. But, in order to carry out the design of the Society which employs me, I have tho’t it would be necessary for me to go to some other place. The Rev. T. W. Lewis, by Government authority, has taken possession of the Methodist Church edifice in behalf of the Methodist E. Church. And because I am bound to work for the fraternal benefit of the African M. E. Church, he withholds the Edifice from me, and Mr. Brinkerhoff, Superintendent of Contrabands, being a Baptist Preacher, occupies it on the Sab. The circumstances of the case would not justify an attempt on my part to procure another House and draw off a part of the congregation. A regiment of soldiers is here without a chaplain and I was requested to serve them, but this would not carry out the specific designs of my mission. I therefore proposed to Rev Brinckerhoff that he and I should alternate between the Soldiers and the Colored People, but he declined, preferring to labor wholly with the
colored people. So I decided to labor with the Soldiers, till it would be convenient for me to go another place, when the heat of Summer should be past. And I wrote immediately to Bishop Payne, stating the case as above. But have not yet received his answer. I look for it now every day, unless he has gone to Europe . But there is no plan on the eastern coast of this state when the object of my mission could be accomplished any better than this. It had occurred to me, therefore, that the best thing I could do, was to ask the African Society to release me, provided you would give me an appointment to this place or some other, or be so kind as to procure me an appointment by the Am. Freedmens Relief Asn. I should have a strong preference for staying here, as I am confident my health would be better here, and I could, for that reason, be more useful here than anywhere else. But, as formerly, I should hold myself ready to go wherever I should be sent. Between the colored people and the soldiers here is plenty of work for Rev. B. and me. And if I should be freed from my present [..?..] obligation, Mr. Lewis would gladly give me the use of the house, or any other in his possession unoccupied by a Minister of the same denomination. In that case, Rev. B. and I could take care of the Methodist and Baptist Church respectively, and I doubt(?) not we should work together very harmoniously. I am [now ?] at his [instance ?] teaching school, having commenced two weeks ago, the Teacher being absent for three months.