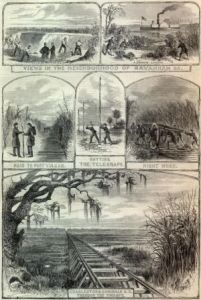 Today, a Sunday, Sherman surveys the environs of Savannah in anticipation of attacking the city within days.

From within the city and their defensive positions nearby, Confederates anxiously await. And while white Baptists pray earnest for God’s protection from the Federals, black Baptists, now on freedom’s threshold, pray for the success of the Union Army.

In Nashville, where several inches of snow blanket the ground, Union troops can easily see Confederate soldiers “standing about their camp fires.” Minor skirmishes take place now and then.

The Rebels, patiently waiting, are hoping that the Federals will come out of the city to attack them. Playing defense, Hood believes, will be to his advantage.

White elites of the Confederacy, while remaining upbeat publicly, know the desperateness of the hour. An editorial in this week’s South Carolina Confederate Baptist cheers on the defenders of the South with glowing words of praise and encouragement.

As this terrible struggle advances, intense solicitude is awakened, in behalf of those, who are more immediately engaged in it, who endure its burdens, and reap its honors. No name has a prouder preeminence than that of Confederate soldier; no other citizen is contemplated, with such admiration and affection. All honor him. The benevolent supply his wants; the pious remember him in their prayers; the fair greet him with their smiles.

The country is anxious that he shall prove himself a brave and incorruptible patriot; the church prays that he may be a true soldier of Jesus Christ. We wish to see the Confederate soldier the model of the gentlemen and the christian. Let him eschew all profanity: be as courteous as he is brave, protect the innocent; relieve the helpless; stand sentinel over his country’s fair name; and give his heart to God. Let him so act that his dear country may point him and his comrades, and say, “These are my jewels.”

That many soldiers of the South have already abandoned the war and returned home to provide for their suffering families is a matter unmentioned.