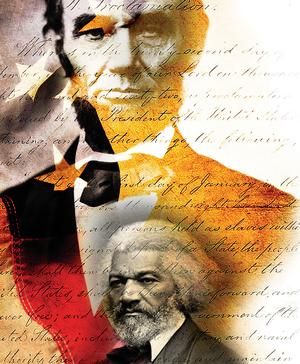 Today, the one-year anniversary of the Emancipation Proclamation, is a joyous occasion among free blacks, many of whom have obtained freedom within the past year.

The year since the signing of the proclamation has witnessed a revolution in race relations. Prior to the proclamation, many Northern whites were uncertain that freed blacks would prove worthy of white efforts to win their freedom. Now, black soldiers in the Union army, numbering in the many thousands, have proven their courage in battle, while tens of thousands of newly-freed blacks in Union settlements are learning how to read and write and are acquiring marketable skills.

Against the backdrop of freedom acquired and the prospects for the future, today is a holy day in the lives of free blacks, a day to celebrate God’s great deliverance from the hands of Southern pharaohs.

In the Union army camps along the coast of South Carolina black soldiers celebrate in high spirits.

The men formed and proceeded to the parade ground, whee a dry goods box covered with a rubber blanket was placed, to serve as a speaker’s stand. Chaplain Harrison offered a prayer and then introduced … Sergeant Barquet of Company H. Barquet was in high spirits, and began with the quotation, ‘What means this sea of upturned faces,’ etc. The speaker had hardly warmed up to his work, when in the midst of a most impassioned harangue the dry-goods box carved in, carrying him down. Barquet, no no way disconcerted, from the wreck shouted out the well worn gag! ‘Gentlemen, I admire your principles, but damn your platform!’ After the hilarity resulting from the discomfiture of the chief speaker had subsided, others addressed the meeting with more or less effect. In the evening the non-commissioned officers had a supper in the large tent used to cover the quartermaster’s stores. Among the good things provided were baked beans and Indian pudding.

Throughout the North and in Union-controlled areas of the South, black Baptist congregations celebrate this day with worship, prayer, feasting and dancing.

Some celebrations take place far from battlefields, including at the First Baptist Church of Virginia City, Nevada. The day’s events include a brass band and dancing into the evening. Among the featured speakers is local black citizen Thomas R. Street, who voices support for Lincoln and for racial justice.

In Street’s closing remarks, he addresses his understanding of what “social equality” for blacks would entail:

I speak of the rights of the colored race; it is a subject about which there has been much of misrepresentation and much of the Anglo-Saxon what he calls social equality. We have as little desire for social equality with him, as he can have for social equality with us. We prefer to mix with our own people, to form our own society, to have our own customs, our own manners and our own destiny. The rights we ask are those which properly belong to every member of the human family, of whatever country or race, the right to eat what we earn, to enjoy unmolested our lives, liberty and property, and to be justly protected in the exercise of those rights by the Government which we aid in supporting and preserving.

Wage-earning jobs comprise a significant portion of the rights that enslaved blacks desire. In today’s Christian and Reflector, a publication of Baptists of Massachusetts, Harriet Beecher Stowe addresses the rising of the common man above Southern planters, declaring that the present war is

THE war for the rights of the working classes of mankind as against the usurpation of privileged aristocracies. You can make nothing else of it.

Wage labor is indeed feared by rich southerners, whose profits are generated by slave labor. Southern intellectuals routinely criticize the inhuman nature of wage labor in cities the North, striving to facilitate unrest among the Northern opponents of the Lincoln administration. As to being “privileged,” rich Southern planters fancy themselves as aristocrats, a theme frequently referenced in Southern literature of the era.

While Southern whites fret at the prospect of the end of slave labor in the South, blacks yet enslaved quietly pray that freedom — and the rights thereof — will soon be theirs.