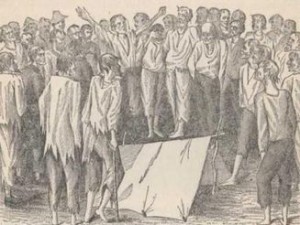 Atlanta is not the only thing on Union General William T. Sherman‘s mind. While capturing the strategic city is his uppermost objective, Sherman’s thoughts also drift further southward.

In particular, the general is troubled at the reports he is hearing out of Andersonville Prison, an open air prison camp in southwest Georgia housing nearly 30,000 Union soldiers. The conditions are reported as being the most horrendous of any war prison yet. Disease and death are pervasive, while prisoners are routinely abused by their guards. How Sherman would like to attack the camp and liberate the Federal prisoners.

Perhaps just such an opportunity will present itself, the general hopes, anger rising at the thought of what the Rebels are doing to U.S. soldiers.

Within the prison, a few men take charge of religious services among their fellow prisoners. After the war an eyewitness recounts:

There was a little band of devoted Christian workers, among them were Orderly Sergeant Thomas J. Sheppard, Ninety-Seventh O.Y.L., now a leading Baptist minster in Eastern Ohio; Boston Corbett, who later slew John Wilkes Booth, and Frank Smith, now at the head of the Railroad Bethel work at Toledo. They were indefatigable in trying to evangelize the prison. A few of them would take their station in some part of the Stockade (a different one every time), and begin some old familiar hymn, like

“Come, thy fount of every blessing”

and within a few minutes they would have an attentive audience of as many thousand as could get within hearing. The singing would be followed by regular services, during which Sheppard, Smith, Corbett and some others would make short, spirited, practical addresses, which no doubt did much good to all who heard them, though the grains of leaven were entirely too small to leaven such an immense measure of meal.

Meanwhile, slaveholders in the Confederate capital of Richmond, Virginia struggle to maintain possession of their human chattel. With the Union Army hunkered down only ten miles distant, slaves are escaping with increasing frequency, as daily runaway notices in the Richmond Daily Dispatch hint, while often feigning confidence that faithful slaves — runaways nonetheless — had most assuredly left their masters to join the Confederate Army, as one example from today’s paper demonstrates.

500 dollars reward.
–Ran away from the subscriber about the 1st of February last boy John, about 14 or 15 years old, light copper color, with short, straight hair; had on when he left a new suit of cotton clothes, dyed send color. John was purchased of Dr. Wright, of Alabama. I have no doubt he is with our army. The above reward will be paid for his apprehension and delivery to Lee & Bowman, Richmond, Va, or secured in any jail so that I get him.

Wishful thinking on the part of the slaveowner aside, rest assured that imprisoned (as are all) slaves are just as eager to escape confinement as are Yankee prisoners of war in Andersonville.