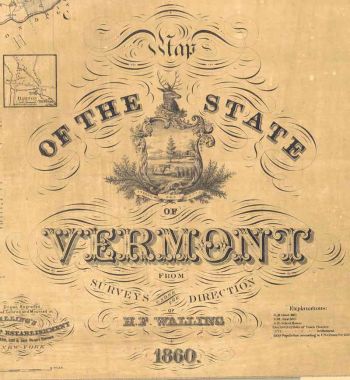 The First Baptist Church of Burlington, Vermont, founded on September 26, 1834,struggled into the late 1850s, often having no regular pastor. And whereas the Civil War and resulting loss of many male members poses a challenge for many churches in the North, First Baptist Burlington experiences the opposite effect: instead of facing greater struggles, the congregation during the war witnesses its first sustained period of growth.

Now, the congregation is nearing completion of its first meeting house, a building that is designed, it seems, to showcase the recent successes of the yet aspiring Baptist town folk.

Not surprisingly, the citizens of Burlington have been watching the progress of the building, as is revealed in a letter written today by a town resident.

I returned from a few weeks stay in Baltimore where I have been trying to scrape together a little of the “filthy lucre, a few days since and found your letter here. We are all glad to know that you “still live.” As for Mrs M the photograph shows that she still lives and lives full as well as before she left. It ought to be a hanging matter for any one to say the picture does not look well. Our matters here go along much as usual I think we are getting up a little in the world at our house for the street commissioner has lowered the sidewalk and street around our house a foot or two leaving us up in the air and the walks in an abominable state for now they are all soft sand. I recd your book just before I left home but have not had time to look at it Mother is reading it I believe and has found out her part, quite a small one I think In last evenings N.Y. Times there is a long and quite favorable notice of it and I have before seen notices in the Tribune and Independent speaking quite highly of it. The Baptist Society have got the outside of their church nearly finished and very finely it looks too. They have the heaviest bell in town and seem determined to worship in as fashionable a manner as any of us. H.P.Hs church gets along slowly, the roof is almost finished but the walls are so low and the roof so large and high it looks like a boy with his fathers hat on. Speaking of boys puts me in mind that I have one of them myself now nearly of the mature age of eleven weeks, stout and healthy, with a voice like the great organ of Boston. He is enrolled among the militia and liable to draft I suppose. He has gone with his Mother to spend a few weeks in the country and perfect himself in infantry tactics. Our business never was better but prices are awful. I sold one pound of coffee today for .75 cts.

Other things are in proportion. My brother & family are now here so our summer hotel is full. Enos Peterson and the old veteran shoemaker are both dead. No other deaths since I last wrote. We tried to nominate Mr Edmunds for Congressman but the slate was already made up so we could’nt. We will try again. I suppose you like to hear about the war from the people as they sayWe are in hopes the thing is drawing to a close, for this summer has been quite hard on the poor boys from this town. Quite a large number have been killed, more than ever before

The 3rd Vt Regt has just arrived here to be paid off its three years having expired. They number 104 officers and men! Where are the rest.

Do not think we mean to give up this thing for we cannot, we are now too far in to back out. It is nearer to go forward than back now. We all believe in Grant for we think he is now in a position to take Richmond surely.

Atlanta is now ours but we lost an officer whom we all regard as the peer of Grant himself.

I mean McPherson. How few of the men who commenced this war will live to see the end of it. Burlington has still about 35 men to raise on the last call for 500.000 men They will be forthcoming without any draft. During my stay in Baltimore we had our annual raid and scare. Things looked quite seriously for a few days but it soon blew over

Had the rebels known how few men were left in Washington they would certainly have marched straight in there as well as spend their time stealing horses c c. Hoping to hear from you soon I am

Yours c A G Peirce

Peirce’s observation that “Atlanta is now ours” proves prescient, although it takes a bit longer for the Union to sack the Southern city.

As to Burlington’s “Baptist Society,” the First Baptist Church does indeed prosper in the years to come.