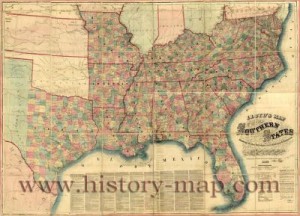 On both accounts, Stoneman fails.

Two days hence, while attempting to withdraw to the safety of Union lines in the vicinity of Atlanta, Stoneman’s forces encounter resistance north of Macon as local Confederate forces rally to defend the middle Georgia city. In what becomes known as the Battle of Sunshine Church, Macon Baptist pastors Ebenezer W. Warren and F. M. Haygood, among other Maconites, “gallantly marched forward in the ranks and helped repel the enemy.”

The Confederates gain the victory this day, capturing General Stoneman and some 600 of his men. Angered at the destruction the Federals had visited upon their homes and lands in the days prior, the Rebels hang the general’s black guide.

Meanwhile, in South Carolina this day the Baptist divines assembled in Greenville want to believe that victory will yet be theirs in the battle against the abolitionist North. White South Carolinian slaveholders, in many ways most responsible for bringing about the Civil War, are quite well represented among the state’s leading Baptists who this day go about conducting the business of their state Baptist convention.

The war, and the consequences of the war, are uppermost among the minds of those gathered. Among today’s actions and resolutions are the following:

On motion of Brother Manly, it was

Resolved, That a Committee of five be appointed to inquire whether any action should be taken by this Convention to aid in providing for the helpless, orphans of our State. The President appointed Brethren Manly, Earle, R. Furman, Dargan and Cartledge the Committee.

Resolved, That the Committee, on aiding orphans, be instructed to report a plan for accomplishing that object in connection with Furman University.

After remarks by Brethren Dargan, Broadus, Cartledge, Taylor, Boyce, Elford and Manly. On motion of its author, the resolution was laid on the table so as to leave the Committee without restrictions.

On motion, it was

Resolved, That the Treasurer of the Convention be authorized to pay over to the Colportage Board, the sum of $210.50, received by him from the Charleston Female Missionary and Education Society, for the spiritual wants of our soldiers.