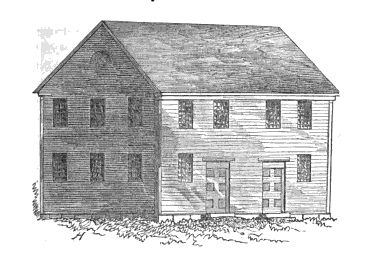 While war yet wages strong and bloody, Baptists of the North have taken time this year to celebrate significant milestones.

Theron Brown, the Canton church’s pastor, delivers the anniversary sermon, a discourse based on Ezra 4 that includes a review of the church’s history that begins thus:

Fifty years ago, the red scourge of war which we feel today afflicted the fathers who cultivated the fields around us. Then, as now, the sweat of the face, by which,man eats his bread, was wrung out by burdensome taxes, which fastened upon his estate as well as upon the comforts and luxuries that stocked it; and the families of our ancestors were as familiar as we with the weekly news of desolation and blood. Then, as now, the whole face of society wore the frown of “hard times; ” and ” the cry of the poverty that distressed alike the people and the priest resounded from every hill and every valley.” Both England and Algiers had drawn the sword against this country; and during the year in which this church commenced its existence, no immediate prospect appeared that the strife would cease. The people of that day were not a whit behind us in fellowship with toil and trouble. Neither in their civil nor religious privileges were they a whit better off than we. The hardship of war was aggravated to the New-England fathers of that generation by their honest belief that it was unnecessary and unwise. Nor was their President, in any quality that makes the honest, fearless statesman, at all to be compared to ours; while, ecclesiastically, their good consciences suffered under the tyranny of the “half-way covenant,” and the new theology which was its offspring, and which had gradually made its way, in spite of “the ponderous logic of Jonathan Edwards, the burning rhetoric of Edward Griffin, and the withering sarcasm of Lyman Beecher,” to a power and influence that well-nigh swallowed up Harvard College, and palsied half the heart of Calvinistic New England before it was aware.

In a struggle where all evangelical faith was interested for life or death, it was no time for the Baptists to be at ease in Zion. The voice of Stillman had hardly ceased to echo from the old meeting-house by the “Mill-pond;” and the trumpet tones of Baldwin were heard with no uncertain sound, rallying the followers of Jesus round the prayer-meeting and the baptismal covenant; and, nearer home, the humbler but no less faithful witness of Elder Joel Briggs of Randolph, admonished the ungodly of “righteousness, temperance, and a judgment to come.” For more than sixty years, this neighborhood had known no revival of religion. The half-way covenant, in force since 1657, with its consequent curse of an unconverted church membership, and the long habit of depending on compulsory taxation for the support of the ordinances of the gospel, contributed largely to produce a spiritual coldness that rendered the case of professed Christians apparently as desperate as that of the most notorious unbelievers.

The only church in Canton was the church of the standing order, now Unitarian, at the Corner, then under the pastoral care of Rev. William Ritchie. Founded in 1717, this church had learned to regard itself indisputably entitled to the ecclesiastical control of the ‘whole “North Precinct; ” and as early as the days when Whitefield, in his first itinerations through New England, electrified the people of Dorchester, it had set itself, pastor and people, resolutely against him, and closed the pulpit in ” South Village ” so effectually to his offered entrance, that it is said he foretold in prophetic indignation the spiritual barrenness of their future years. Be that as it may, an influence more potent than any words of Whitefield, whether to curse or bless, now began to stir in the community, and awaken signs of religious life.

In the fall of 1811, Elder Briggs held by request a meeting in a school-house, about five miles from this spot, in the east part of the town, now known as York Street. The Spirit of God had prepared the way; and one, already in the joy of a good hope through grace, was able at that meeting to testify for Christ. Others, who had been secretly serious, went away deeply affected by the sermon; and the impressions of the evening were such, that the good Elder felt justified in making another appointment. He continued the meetings here with most cheering results. His preaching began to be thronged by curious and then by willing listeners. It was the voice of Ezekiel prophesying to the dry bones. Opposition awoke with the revival of religious feeling, and kept pace with the success of gospel truth. Part of it came from that denominational prejudice, which, from the beginning of a divided Christianity, has never been able to look comfortably on the severe simplicity of New Testament Protestantism; and part of it came from the natural malice of wickedness, which habitually sets itself against pure religion. Mr. Ritchie saw no good in the new movement that was making such inroads on his parish. He commenced a series of afternoon lectures, in private dwellings, among his people, to counteract it. He sent for Mr. Whittaker of Sharon to denounce it; and some of the invectives of that preacher against the Baptists are remembered to this day as specimens of that bitterness which was then everywhere felt towards the despised sect. The good Canton parson even made appointments himself at the York school-house, and strove, by partially modelling his own meetings after those of Elder Briggs, to satisfy, while he rebuked the spiritual agitation which was bearing so many away to the ” fanaticism ” of the Baptists. “They went out from us,” he quoted in one of his sermons, ” because they were not of us;” and he spoke the truth….

Despite local opposition, the Baptist congregation was birthed in 1814, and now, 50 years hence, is prosperous. Having survived one war, church members are confident that the congregation will survive the present war.