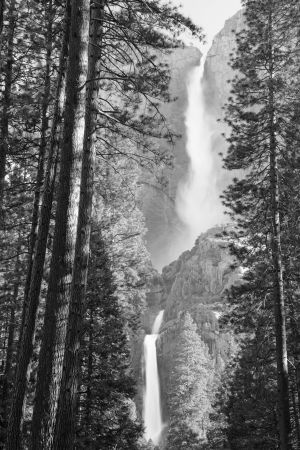 The impact of the Civil War extends far beyond the battlefields to the distant reaches of the Pacific Coast, growing in scope as the war progresses.

Western towns by the hundreds have been settled since 1860. Enormous wealth in gold and silver has been mined from western lands since the war begin. And natural wonders have been brought to the attention of Washington, D.C.

Of the later, there are fantastic rumors of spouting geysers, hell-like features and groves of petrified trees in the Terra incognito area on and below the south central border of newly-founded Montana Territory. Too tall for most to believe, the rumors are tickling the ears of a handful of frontiersmen, although the wonders of the future Yellowstone National Park are still six years shy of being officially documented.

On the other hand, the splendors of the Yosemite Valley in California have become well known enough known that today U.S. President Abraham Lincoln signs the Yosemite Grant Act, preserving the the Valley for “public use, resort and recreation.” Yellowstone will eight years hence become the world’s first national park, but the majesty of the Yosemite Valley has already begun a conversation about the value of preserving the most spectacular of American wilderness.

Be it enacted by the Senate and House of Representatives of the United States of America in Congress assembled, That there shall be, and is hereby, granted to the State of California the “cleft” or “gorge” in the granite peak of the Sierra Nevada Mountains, situated in the county of Mariposa, in the State aforesaid, and the headwaters of the Merced River, and known as the Yo-Semite Valley, with its branches or spurs, in estimated length fifteen miles, and in average width one mile back from the main edge of the precipice, on each side of the valley, with the stipulation, nevertheless, that the said State shall accept this grant upon the express conditions that the premises shall be held for public use, resort, and recreation; shall be inalienable for all time; but leases not exceeding ten years may be granted for portions of said premises.

Meanwhile, today’s Richmond Daily Dispatch features an article on the efforts of Virgina Baptists to provide for the needs of the orphans of dead and wounded Confederate soldiers.

The following appeal in behalf of the children of our deceased and disabled soldiers, is published at the request of the Baptist General Association of Virginia. It is unnecessary to say a word in recommendation of a scheme possessing so much pure philanthropy and general patriotism; but we cannot help expressing the hope that it will meet with a prompt and generous response:

The education of the needy children of Confederate soldiers.

At the last meeting of the Baptist General Association of Virginia a committee of seven members was appointed to report to the next meeting of the body some plan for promoting the education of the children of deceased and wounded soldiers of the Confederate army; and in the interim to adopt such measures as they may deem proper to further the object. The importance of the work all must admit. Multitudes of children have, by this cruel war, been deprived of paternal supervision, and the means of obtaining a useful education; and it seems most reasonable and just that those in whose defence their fathers have sacrificed their lives of their health should contribute to the education of their unfortunate and dependent youth. The committee, having had the subject under consideration, have adopted a provisional plan of operations. They propose, not to originate schools, but to patronize such as now exist, or may hereafter be brought into existence — to limit their efforts, except in special cases, to aid in giving a good English education — and, in making their appropriations, to be controlled by neither sectarian, sectional nor social distinctions. For the prosecution of their work they have appointed Rev A E Dickinson their Corresponding Secretary and General Agent. His eminent success in the work of the army colportage — to which his time will be still chiefly devoted — furnishes the best assurance that he will vigorously and the enterprise. They cordiality invite cooperation of all who are interested in the object and do not find some more inviting channel for their contributions and their labors. In this work there can surely be neither jealousy nor rivalry. The work is vast and important, and admits not of much delay. If all religious denominations engage in it — if societies are originated for its prosecution in every city and county, and if the Legislature should make large appropriations to it — still It is great enough to exhaust the resources and tax the energies of all. The committee will be ready to co-operate with all, and to use the means that may be placed at their disposal, so far as may be practicable for the relief of all the needy.

The committee deem it unnecessary to say anything in the defence or advocacy of a cause which appeals so impressively to the noblest sympathies of the man, the patriot, and the Christian. If the generous sacrifices, the severe sufferings, and untimely deaths of the brave soldiers struggling in the cause of Southern independence; and the wants and woes of their bereaved and needy children, fall to awaken the sympathies of the heart and call forth the charities of the hand, no words of the committee, or of an angel, can be of any avail.

Contributions may be forwarded to Rev. A. E. Dickinson, or to Wellington Goddin, Esq., Treasurer.