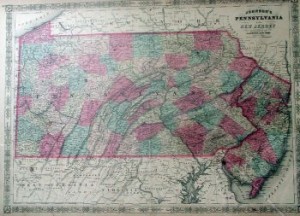 Not infrequently the Civil War divides families and generates opposing loyalties. As the fourth year of the great conflict approaches and the fortunes of the Confederate States fade, the divisive nature of the war becomes ever more noticeable and personal.

Today, in many respects, is like many other days during the war. Men enroll as soldiers, soldiers fight (in Arkansas and Louisiana in this instance), and soldiers die, whether by battle, injury or illness.

One soldier enrolling today is 18-year old, 6′ 1″ Jonathan R. McHargue (1845-1921), who joins the 50th Pennsylvania Infantry, Company C. While innocuous enough on the surface, McHargue’s story is far from typical.

McHargue is a North Carolinian and a Baptist … and this is not the first time he has enrolled for military duty.

A mere five months earlier McHargue, living in Watauga County, North Carolina, had mustered into military service with the 4th North Carolina Infantry Regiment, Company B — a Confederate regiment. His time in the field proved short, as he was apparently captured by Union forces on December 5 in the vicinity of Culpeper, Virginia.

From there the prisoner McHargue was transported to the Capitol Prison in Washington, D.C., a facility located behind the Capitol building. At some point he, like an increasing number of Confederate prisoners, took an oath of loyalty to the United States. From there he was sent to Philadelphia, and today, at Reading, Pennsylvania, McHargue enrolls in the 50th Pennsylvania.

In the months following the 50th fights in many of the remaining major battles of the war, including the Virginia Wilderness Campaign and Spotsylvania Cour House (May 1864), Cold Harbor and Petersburg (June 1864), and, again, Petersburg. Ironically, McHargue’s old regiment, the Confederate’s 4th North Carolina, also fights in many of these battles.

McHargue receives an honorable discharge from the 50th Pennsylvania on July 30, 1865. Eventually he returns to North Carolina and marries.

J. R. McHargue passes away at his home in West Elkin, [North Carolina], 23 November 1921 – Early Sunday morning at this home in West Elkin, J. R. McHargue passed away after a protracted illness of many months. He was 76 years of age, a consecrated Christian and a consistent member of the Baptist church. He is survived by his wife, three daughters and one son. The funeral was conducted from the home by Rev. W.T. Baucom, interment following in the cemetery at Pleasant Hill Church. 24 November 1921 He enlisted into the Confederacy on 6 October 1863 at Camp Vance, North Carolina. He was in the 4th North Carolina Infantry Regiment. Two months later, on 5 December 1863 Jonathan was captured by Union soldiers in Culpeper, Virginia and taken to Capitol Prison in Washington, DC. Upon taking an oath of amnesty he was released and taken to Philadelphia. He then joined the 50th Pennsylvania Infantry, a Union regiment. He stayed with the unit and applied for and received a pension from the Federal Government for his service. His Pennsylvania unit information is carved onto his tombstone in Surry County, North Carolina.