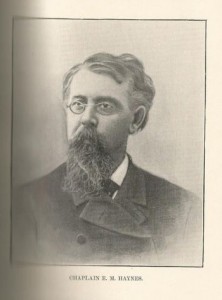 The First Battle of Saltville takes place today in Virginia.

Salt is an important war-time commodity. In today’s battle, Union forces attempt to seize saltworks controlled by Confederate forces. For three days the fighting rages, until at last Confederate soldiers, regulars and home front guards, although outnumbered, defeat the Federals.

Upon defeating the enemy, irregular guerrilla Rebel forces, under the command of Champ Ferguson, murder a number of injured Union soldiers, white and black alike. After the war, Ferguson is tried in Nashville for the killings, as well as other offenses during the war. He is found guilty and executed.

For now, however, the Confederate victory is but temporary. By the end of the year the Confederate saltworks are captured and burned by Union forces in the Second Battle of Saltville, yet one more blow to a rapidly sinking South.

Meanwhile, a  Baptist, a fighting chaplain in the 10th Vermont, resigns from the Union Army today. Afterwards he transitions from the chaplaincy to the pastorate.

The story of Edwin Mortimor Haynes is told in his Vermont obituary, as follows:

Rev. Edwin Mortimor Haynes, D.D., 76 years old, died at his home, No. 38 Grove street last evening at 9:15 o’clock after a year’s illness with heart trouble. Although Mr. Haynes had been in poor health for over a year, his serious illness had lasted but a week.

Mr. Haynes was born at Concord, Mass., April 12, 1834. He was a graduate both of the University of Rochester and the Rochester Theological school at Rochester, N.Y., receiving the degree of doctor of divinity, from Dartmouth college. He was married to Miss Agnes Nicholson of Wallingford July 27, 1857, and enlisted as chaplain in the 10th Vermont regiment in the Civil war on August 18, 1862. The regiment left Brattleboro September 6, 1862, and reaching Washington on the 8th, went into quarters at Camp Chase near Arlington Heights the next day. The first engagement of the regiment, which rose to the dignity of battle, was the action at Locust, or Orange Grove, Va. On November 27, 1863. In the Wilderness campaign of 1864, the 10th Vermont regiment with the 106th New York, rendered efficient service in covering the retreat of the Union troops before the Confederates. Mr. Haynes resigned from the regiment October 2, 1864, having seen service with them in the engagements at Orange Grove, Va., Wilderness, Va., Spotsylvania, Va., North Anna, Va., Totopotomoy, Va., Cold Harbor, Va., Welden Railroad, Va., Monocacy, Md., Winchester, Va., and Fisher’s Hill, Va.

Upon resigning from the service Mr. Haynes held Baptist pastorates at Palmer, Mass., Lewiston, Me., Whitehall, N.Y., Meadville, Pa. And Chicago, Ill. He had been a resident of Rutland for 20 years since retiring from the ministry. He was a member and at one time chaplain of the Military Order of the Loyal Legion, and for 10 years acted as chaplain at the house of correction, besides being a member of the G.A.R., Mr. Haynes was of a studious nature and was the author of the History of the 10th Vermont Infantry.

He is survived by one daughter, Mrs. Katherine H. Raymond of this city, and two sons, David N. Haynes of Boston, Mass., and Ned C. Haynes of Butte, Mon.