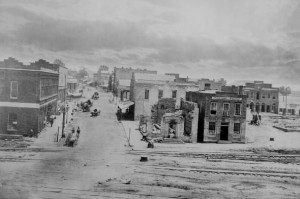 A city ablaze greets the dawning of a new day in the South. Atlanta, deserted by Confederate defenders, is yet aflame from fires started by the departing rebels, while pillaged store fronts bear evidence of a night of looting.

Union General William T. Sherman and his armies march uncontested into the city, which is surrendered to the general by  mayor James M. Calhoun. Shortly thereafter a United States flag again flies over Atlanta.

Today is the Union’s greatest victory since Gettysburg, crushing the remaining hopes of the South.

Residents of Atlanta react in various ways. Many whites cower in their homes, afraid to expose themselves to the enemy. Union sympathizers come out of hiding. Abandoned slaves rejoice in their newfound freedom.

From the trenches of Petersburg to the streets of Chicago, Union cannons far from Atlanta fire in salute. Few, North or South, doubt that the war is soon to be over. Southern elites sink into misery, freedmen celebrate, and Peace Democrats meeting in Chicago despair.

With Atlanta fallen, there will be no mercy upon the South, even as Confederate leaders in the days to come determine to fight to the bitter end.

On the morrow, a jubilant Sherman telegrams the War Department in Washington with a succinct but triumphant message: “Atlanta is ours, and fairly won.”

A new chapter in the Confederacy thus begins, one that few truly believe will end well.

Even so, this week’s South Carolina Confederate Baptist scoffs at a “new era” in the North, a commentary reiterating, for the thousandth time, white Baptist elites’ commitment to white supremacy and black slavery.

President Lincoln invited a negro servant to take a seat with him in his carriage, and ride to the presidential mansion, whereat the Washington Union is greatly scandalized, and so are many others, North and South. but they forget that “consistency is a jewel,” and the President has simply followed out the principles of his supporters. If the Yankees will vote with the negro and fight with him, they ought not to decline riding with him. Miscegenation is the social creed of the party; and perhaps Master Boll may gratify his father and illustrate their common principles, by leading home to the White House a sable bride. The contrast will be interesting. When men abandon the precepts of Scripture on the subject of slavery, they quickly fall into innumerable absurdities. “Truth is one; error is manifold,” and one folly paves the way to another.

Religious indignation aside, the fall of Atlanta signals the failure of a government built upon the human bondage of biblical literalism.