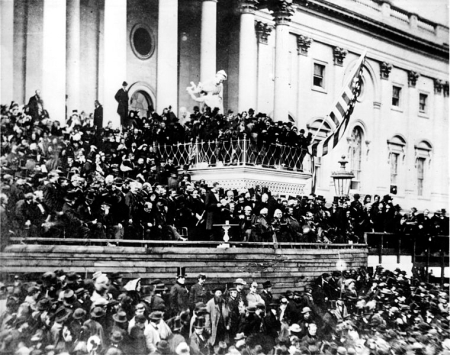 The crowd of people gathered on the grounds of the capitol are cheerful and loud, rejoicing in the end of the great conflict that has left perhaps 700,000 dead.

Not that the war has officially ended quite yet. Although Lee‘s Army of Northern Virginia has surrendered, there are still lesser Confederate armies in the field. But they, too, will surrender soon enough, Northerners feel certain.

Inside the capitol, a quiet and reflective Abraham Lincoln ponders that which lies ahead for the freedmen of the South, peering down a road certain to be marked with many struggles. Many white Southerners will resist black equality, the President is all too aware. And yet, freedmen must be welcomed into full citizenship. Louisiana, even now, offers hope of a good future for former slaves.

Addressing the crowd in the evening, Lincoln begins by offering thanks to God and the Union’s generals, officers, soldiers and sailors:

We meet this evening, not in sorrow, but in gladness of heart. The evacuation of Petersburg and Richmond, and the surrender of the principal insurgent army, give hope of a righteous and speedy peace whose joyous expression can not be restrained. In the midst of this, however, He from whom all blessings flow, must not be forgotten. A call for a national thanksgiving is being prepared, and will be duly promulgated. Nor must those whose harder part gives us the cause of rejoicing, be overlooked. Their honors must not be parcelled out with others. I myself was near the front, and had the high pleasure of transmitting much of the good news to you; but no part of the honor, for plan or execution, is mine. To Gen. Grant, his skilful officers, and brave men, all belongs. The gallant Navy stood ready, but was not in reach to take active part.

Much of the rest of the lengthy speech is focused on Reconstruction efforts in Louisiana, a state prior to the war that was home to some of the largest plantations in the nation, many profiting from the stolen labor of hundreds and even thousands of slaves. The President is hopeful that the Reconstruction government in Louisiana, although yet in the early stages, will point the way for other states and will garner the firm support of Northern states.

…. Some twelve thousand voters in the heretofore slave-state of Louisiana have sworn allegiance to the Union, assumed to be the rightful political power of the State, held elections, organized a State government, adopted a free-state constitution, giving the benefit of public schools equally to black and white, and empowering the Legislature to confer the elective franchise upon the colored man. Their Legislature has already voted to ratify the constitutional amendment recently passed by Congress, abolishing slavery throughout the nation. These twelve thousand persons are thus fully committed to the Union, and to perpetual freedom in the state–committed to the very things, and nearly all the things the nation wants–and they ask the nations recognition and it’s assistance to make good their committal….

This is the first time Lincoln has publicly talked about giving blacks the right to vote, and at least some are troubled by the President’s words. One, John Wilkes Booth, a Confederate and (like many white Southerners) a white supremacist, vows “That is the last speech he will make.”

Little does the world know that Booth will, only three days hence, take the life of the President.

Far away from Washington, the war has scattered the professors of the Southern Baptist Theological Seminary of Greenville, South Carolina. For several years now the seminary has been shuttered, with most of the faculty preaching in country churches and struggling to get by, as is the case with so many white Southerners.

Nonetheless, the faculty make it a point to keep in touch by letter. Writing to Basil Manly today, John A. Broadus does not want to believe that the South has essentially lost the war.

Lee has been defeated, but the cause of the white South is not dead. Although not of a violent nature as is Booth, Broadus remains committed to white supremacy in the South.

I take it there will now be war in this country fully as long as you or I will live. All thought of doing this or that “after the war,” must, I fear, be abandoned. I still have strong hope that our children may live to see independence, and maybe our grandchildren, happiness. But “man’s extremity is God’s opportunity.” As wonderful things have happened in history as that our cause should now begin to rise and prosper.