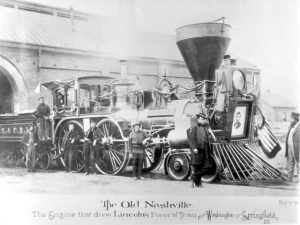 Today Lincoln’s funeral train departs D.C. en route to his hometown of Springfield, Illinois. The slow moving procession is scheduled to traverse seven states and 1,700 miles over the course of thirteen days. Accompanying Lincoln’s body is that of his son, Willie, who passed away three years earlier at the age of eleven. He will be laid to rest by his father.

The train stops in Baltimore, where over 10,000 people turn out to view Lincoln’s remains.

As Lincoln’s funeral train traverses the first leg of a long journey, the disbanding of Confederate armies continues. Cavalry Colonel John S. Mosby disbands his rangers in Salem, Virginia. Among the cavalrymen who disarm is James Shirley Lynn, a Baptist who following the war serves as a Baptist minister and missionary.

Meanwhile, Lincoln assassin John Wilkes Booth remains in hiding near the Potomac River on the border with Virginia, awaiting a chance to cross the river to what he hopes is safety.