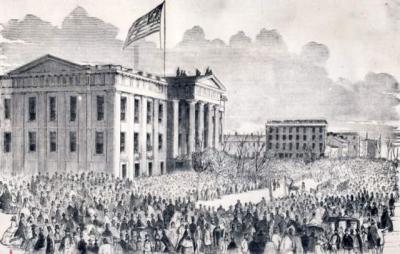 The U.S. flag being raised atop the Jefferson County Courthouse in Louisville in 1861. (from Frank Leslie’s Illustrated Newspaper, March 16, 1861)

The Kentucky State Convention of Colored Baptists convenes at the Fifth Street Baptist Church, representing dozens of black Baptist churches throughout the state.

The organization’s overriding mission is to teach the Gospel and establish educational institutions for black Baptists.The latter priority is especially important as black citizens of the South, yet treated as servants by white southerners, in their legal freedom seek to propel themselves upwards.

Some African American Baptists previously purchased land in Frankfurt and designated it as the home for a future Baptist college. In 1866 the property in Frankfurt is transferred to the Convention. Three years later, meeting in Lexington, the convention is renamed the General Association of Colored Baptists of Kentucky and delegates vote to establish their college in Louisville rather than Frankfurt. Finally, in 1879, the educational institution opens as the Kentucky Normal and Theological Institute.

Located on Seventh and Kentucky streets in Louisville, the college is eventually renamed Simmons College.

In the 20th century the association changes its name to the General Association of Baptists of Kentucky, and in the 21st century is a thriving organization representing almost 200,000 Baptists and involved in many ministries.