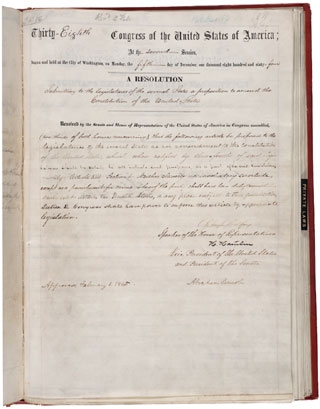 The amendment to the United States Constitution provides that “Neither slavery nor involuntary servitude, except as a punishment for crime whereof the party shall have been duly convicted, shall exist within the United States, or any place subject to their jurisdiction.”

The amendment is the beginning of post-war closure to legal human inequality that has plagued America since its earliest colonial days in the form of the enslavement of black persons. By the time of the Civil War, the Baptist faith was the dominant religious faith of slaves in America.

Yet in the face of white Southern leaders determined to maintain the practice of black servitude minus the ability to legally own black bodies, Republican politicians realize that much more needs to be done in order to affect America’s founding principles of freedom and equality for all.