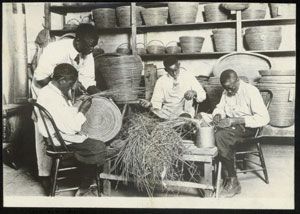 A Basket-weaving Class at the Penn School

Some of his troops having marched into South Carolina earlier, Sherman’s forces are now fully engaged in the invasion of the Palmetto State.

Meanwhile back in Savannah a meeting is held today at the city’s Second Baptist Church. The purpose of the gathering is to inform freedmen of Sherman’s plan for providing their families with land on which they can support themselves. The Union officials present also hope to recruit some freedmen as soldiers.

One Virginia newspaper offers the following somewhat sarcastic commentary of the meeting, under the title of “The Black Millennium”:

The Savannah Republican of February 5, contains a report of a “freedmen’s meeting” held in that city. The place of meeting was the Second Baptist church, and the Republican informs us that “while the people were gathering”–

The organ was played by a colored man, accompanied with male and female singers; the instrumental and vocal music afforded evidence of the truth that Africa will yet excel in the imaginative arts.

After prayer by “Rev. Mr. French, Chaplain U.S.A., General Saxton was introduced. He told the negroes they were free, and added–

And now I want to tell you, you may own the soil. [Deep sensation.]

In the proclamation of the President, and in the order of General Sherman, are the means to make you Freemen and to own the soil you live on. All these beautiful, fruitful islands spoken of are yours.

The Northern young men–especially the married ones–who voted for Mr. Lincoln will doubtless be delighted to learn that while they are subject to a ruthless and inexorable conscription, their freed “brothers” in Georgia will not be forced to enlist. General Saxton said:

It is the duty of the young man, who is able, to enlist in the service of the country. I mean the young man without wife or family. The first duty is to take care of the family. He that has a large family should first provide for them. The young man, without family, should enlist at once. But you will not be forced to enlist. Not only does the government give you a chance to enlist but it gives you a bounty of $300, and wages, and clothes and rations as other soldiers have.

The General then told the negroes how to possess the land:

I have been appointed by Gen. Sherman as Inspector of Plantations; and will aid you in the getting of 10 acre farms as homes. Now, do you know how much a 40 acre lot is? or how to measure it? Pace off four hundred paces one way; and four hundred the other way; and you have 40 acres; only be sure that you step long, so as to have a good big tract. [Cheers.] If the land where you wish to go is so located, that you do not wish to have the whole 40 acres in one lot, you can pace off in the same proportions. You ought to have some wood land. I recommend each family to have ten acres of wood land, and thirty acres of tillable land? Two hundred paces each way will give ten acres &c. When you go on the large plantations you will find a great many forty acre lots, and should divide accordingly.

You are to have a certificate that this land has been given you according to General Sherman’s order. The officer having the matter in charge will explain all to you.

Saxton, who is evidently something of a theologian, let in a little light upon his hearers, in regard to slavery:

God cursed the south on account of slavery, He cursed Egypt for making bondmen of the Israelites, and He will curse any nation that has slavery. I wish I could explain all this to you, but I have not the time to do it.

When the General had said all that he had to say, he took his seat, according to the report–

Amid much applause, and ascriptions of praise to God, and the President, General Sherman and General Saxton.

The next speaker was Chaplain French. His speech, as was proper, was in a pious vein, and contained much “cute” Yankee advice. We give some extracts, from which it will be seen how close the negro millen[n]ium is at hand:

Your status as yet is not fully defined; it is somewhat like that of the Israelites, had left Egypt, and had not reached Canaan their future, permanent home, but were in the wilderness. They had to make a long journey to reach their homes. You, more favored, are freed on the very soil you are to possess and cultivate as your own. The first provision for the Israelites, on reaching the land of promise, was a homestead. This was the arrangements of Providence. Such also are the arrangements of our government for you, and that too, on a liberal but just scale.

Not long ago since, and the government, with the entire army and Navy, were pledged to keep you in slavery. But now, our government, with its five hundred thousand bayonets and immense navy, is equally pledged to preserve you in your freedom. General Sherman and his mighty army has left you and will carry freedom to others, but the government has sent, in their stead, General Grover, who is now here, with many thousand brave troops to protect, not only the citizens of Savannah, but to protect you in your freedom. [Shouts, &c., abundantly] You see, then how abundantly the Lord has provided for you.

But there is another great work to be done. This Southern country is to be taken care of after the war, by soldiers, and these soldiers in part at least will be colored men, who must help to protect not only the interests of the government, but your rights and liberties. Your young and able bodied men must therefore, enter the war school, the army at once. I would advise, however, that those who have families should first secure comfortable homes for them, and when this is done, that they enter the service of the country immediately. You see here today the General and many other officers with stars and bars on their shoulders. Now, white men think a great deal of these honors; but if I were in your place, I would rather have forty acres of land under my feet that I could walk on as my own than to be covered all over from head to foot with stars. Let white men fight for these honors, but be sure and get your lands–and you must be in a hurry about it, too, for only this morning I heard of a flat boat coming down the river full of people who have asked for a pass to go right down, without even landing in the city. I like to see this wide awake spirit. You must not wait for the General to send a large steamboat to take you down in grand style. No, no; go at once, and if there is no other way get a rail and swim down on that. [Many hearty shouts.] I see already the fire burning in your eyes, and many a one appearing to say “I want to leave the church now and go.” Well, I shall not be surprised to hear of some of you getting wagons and boats, and hoes and seeds, and when inquiry is made for you, if it should be said “Oh! they are down already on their farms.”

While former slaves celebrate a future of freedom and some detractors mock efforts to assist freedmen, Georgia Baptist Christian Index editor Samuel Boykin goes a bit further. “Endure! Endure! Endure!” he cries out to his readers. Rallying white Baptists of the South to fight for the preservation of white supremacy and black slavery, Boykin calls for “a holocaust to [white] freedom and to honor!”