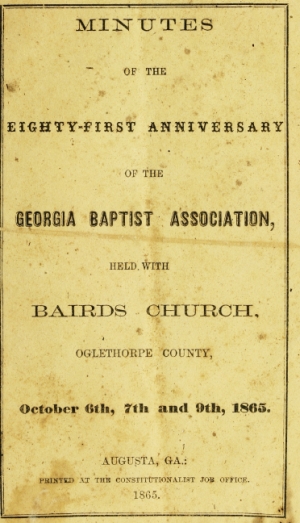 The annual meeting of the Georgia Baptist Association continues today. Gathered in the Bairds Baptist Church in Oglethorpe County, the white Southern Baptist delegates in several resolutions address post-war changes in the South as pertaining to religion.

It is “the sense of this organization and its earnest wish,” one resolution reads, “that the Southern Organizations of our denomination remain intact.” And “we hereby pledge ourselves to sustain them by our prayers and substance, according to the ability left to us after four years of desolating war.”

As to relations between Baptists North and South, “from all we can learn of the light in which Northern and Southern Baptists look upon each other, any attempt on their part or ours, towards united effort, at this time, would be productive of trouble and confusion and not of good.”

But, “it is the duty of all good men to pray that every cause of evil and root of bitterness be taken out of the hearts of all God’s people in all our country.”

As to freedmen, the association invites the Southern Baptist Convention’s Domestic Mission Board “to occupy our associational bounds in its operations amongst the negroes.”

Left unstated is that freedmen have no interest in remaining in the white-led Baptist churches they for generations have been forced to attend, listening to sermons insisting that slavery is the will of God for the African race.

Aiding African American Baptists in the formation of their own independent churches are Northern Baptists, through various organizations, including missionary boards and the Freedmen’s Bureau.

White Baptist leaders, however, are not appreciative of Northern Baptists ministering to their former slaves in the South.