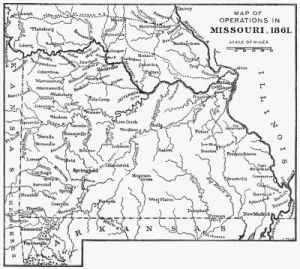 Confederate guerrillas led by “Bloody” Bill Anderson and including Jesse and Frank James, both Baptists, this evening raid Danville, Missouri, a Union-friendly town. Many citizens, recognizing the invasion, flee for the woods, escaping the carnage.

Not all are so lucky as the guerrillas set fire to the town, shooting citizens who dare show themselves.

Some buildings are spared, including the Danville Female Academy, which is saved when quick-witted students charm the raiders from torching the school buildings.

The war in Missouri is one of all-out guerrilla warfare. When Anderson and his gang depart from Danville at midnight, the town is in flames, many are dead (five,  by one account), and others are yet hiding in the woods. Taking a few prisoners with them, the gang eventually releases some.

The town’s postmaster later reports the day’s events to the U.S. Army:

I beg leave to report that on the 14th a band of bushwhackers came to Danville, Montgomery County, and burned the business part of the town. They killed 5 citizens and wounded 1. The post-office at Danville was burned and all pertaining thereto. They kill all men they get hold of who have been in the U. S. Army. 1 have been in the U. S. Army, and am now postmaster at Danville, and am trying to re-establish said post-office, but cannot do so without military protection, and as postmaster I respectfully but earnestly ask that a company of soldiers be sent there to Danville, so that I can return and attend to my official duties without being brutally murdered. Respectfully, &c.,

After the raid, Anderson’s gang moves on to other towns where Union activity is known, pillaging, killing and sometimes torching buildings. Danville, meanwhile, is never the same.

Vengeance, however, is not limited to Confederates. In Virginia this same day, Union soldiers hang 21-year-old Albert Gallatin Willis, a young Confederate soldier whose had happened to be in the wrong place at the wrong time.

A seminary-trained Baptist minister serving as a soldier and chaplain, Willis was on his way home on furlough from service in Mosby’s raiders when he was captured by Union troops and sentenced to death in retaliation for Mosby’s killing of Federal soldiers.

Willis’ death sentence had not been automatic, however. The Federals had captured two soldiers, with the stated intention of hanging one in retaliation. When the other soldier declared, “I have a wife and children, I am not a Christian and am afraid to die!”, Willis spoke up and said, ““I have no family, I am a Christian, and not afraid to die.”

Hanged without a trial, Willis’ body is buried in the Flint Hill Baptist Church in Flint Hill, Virginia.

Collectively, the raid in Missouri and hanging in Virginia provide a snapshot of the chaos into which the war has descended as the Union Army squeezes the remaining life out of a hapless Confederacy.