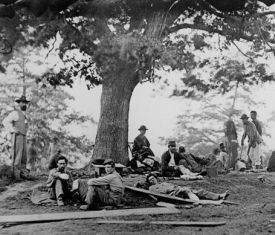 From Harrell’s Store in Hanover County, North Carolina, a writer identified only as “Stella”  makes a home front appeal to the women of the Confederacy in this week’s North Carolina Baptist Biblical Recorder.

I read an article today in the Richmond Whig, on the condition of our army, which stirred my soul to its very depths. Can it be that many of the noble defenders of Southern rights, are battling for freedom, “clad in rags and covered with vermin?” That for want of a change of clothing “their garments are rotting on them?” Alas! it is even so. Through the drenching rain and the blustering wind they shoulder their arms and march at the word of command, exposed to the fury of the storm, with only rags to cover them! Weary and worn, they drag their tired limbs, along with the gloomy prospects of certain death from privations and exposure. It is stated by good authority, that thousands have worn the same clothes ever since the battle or Richmond, from sheer necessity. Is it any wonder that our hospitals are filled with the sick? That death is holding a horrid carnival in our ranks?–Look at the faded cheek and sunken eye of that once handsome youth, the pride of his mother’s heart–listen to the hollow cough of yon pale sufferer whose days are numbered; destitution has dug his grave and he must soon enter its dark portals. The cities of the dead will greatly increase in population if this state of things continues.

We are having a foretaste of winter now; how carefully we envelop ourselves in wrapping when we go out; how eagerly we draw near the blazing fire when we return. God has given us many comforts, but do we think of those who are deprived of them and wish that they too, were thus blest? Wishes cost nothing; works are the proof of our sincerity. “Let us then be up and doing.”

Sisters of the South, you have never been appealed to in vain; you have done much, but “be not weary in well doing.” The hopes of our destitute, but noble soldiers are centered in us; let us fly to the rescue, let us win for ourselves a name for deathless devotion to our beloved country.

Form societies for the benefit of our soldiers. Take a subscription list wherever you go, dun every body you meet; let the cause in which you are engaged arm you with zeal and inspire you with eloquence; don’t scorn the widow’s mite–encourage all to give.

Our little girls can do much in the good cause. They can knit socks and comforts; their nimble little fingers can accomplish a great deal if they will only make the effort, and it will make their hearts glad to know that young as they are, they are helping our soldiers fight by furnishing means by which their health is preserved. In the name of God and humanity let us “rise in our matchless might,” and supply the destitute with comfortable clothing. Delay is dangerous, The turf will soon cover the breast of thousands who might have lived had we discharged our duty. If all the ladies who glory in the name of daughters of the South, will but put their shoulders to the wheel, the Herculean task will be accomplished and 100,000 soldiers clothed with the work of their hands.

As the war progresses, the issue of inadequate clothing for Confederate soldiers grows by the day. The suffering of soldiers is all the more stark compared with the home front comfortable lives of wealthy Southern planters for whom the commoner is fighting. Casting the rhetorical net of “Southern rights” over the institution of African slavery for which the Confederacy is waging war, Southern elites (might this describe “Stella”?) appropriate the woes of soldiers to make emotional appeals to common white folk on the home front to come to the aid of their nation.

In this country virtually devoid of garment factories and industry, Southern white women have for months been busy making clothing for soldiers. Yet the needs are far greater than can be met by weekly sewing sessions and the appeals of aid societies. The fabric of a slave-based nation and economy is unraveling, and no amount of verbal pleadings from on high will produce enough “comfortable clothing” for “destitute” soldiers, much less the financial resources needed to prevail in a long, drawn-out war.

Sources: Stella, “An Appeal to the Daughters of the South,” Biblical Recorder, November 26, 1862 (link); image (link)