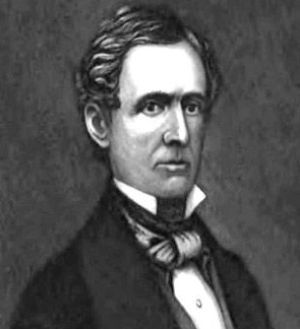 The fortunes of the Confederacy have fallen enough that some white Southern intellectuals have, albeit quietly and discretely, begun contemplating the unpleasant possibility of defeat and the end of African slavery. The outlines of a post-war narrative of Southern defeat are already taking shape, involving themes of white supremacy, righteousness and faithfulness victimized by superior Northern military might, yet undaunted in defeat; the continued subjugation of blacks as an inferior race; and the transitioning of God’s will for the South from that of battlefield defeat to that of Southern spiritual superiority over the North, as proven by the great revivals that are even now taking place in army camps and congregations.

The man who will be credited with giving greatest shape to these outlines is Edwin A. Pollard, a pro-slavery lawyer, writer and editor of the Richmond Examiner.

Pollard has already written several significant volumes. His 1859 book, Black Diamonds Gathered in the Darkey Homes of the South, is a collection of letters written by Pollard in defense of the southern institution of African slavery. Africans, according to Pollard, are children by nature, destined by God to be in perpetual enslavement to the superior white race. His 1861 The Southern Spy: Letters on the Policy and Inauguration of the Lincoln War, defends the slave-based Confederacy as the true champion of liberty and freedom. Both volumes are popular among Southern whites.

Pollard’s second volume of the war, creatively entitled The Second Year of the War, has just recently been published. The same Richmond publishing house publishes this volume as the first, and a review copy is sent to the Richmond-based Virginia Baptist Religious Herald newspaper. After reading the volume, the editor of the Herald includes a brief summary of the volume in today’s edition of the paper.

Occasionally, the future trajectory of a people can be glimpsed in what seems to be the briefest, most innocent of statements. While mostly positive, the Virginia Baptist paper’s mini-review of Pollard’s most recent volume offers a few disparaging words which, in retrospect, offer subtle insight into that which becomes the broad contours of the framing narrative of the post-war, defeated South.

We have received from West & Johnston, publishers, “The Second Year of the War” by Edward A. Pollard, author of “Black Diamonds,’ etc.”–a volume of 326 pages. This is a graphic outline of the course of events from the fall of New Orleans to the battle of Murfreesboro–a period illustrious with the names of Seven Pines, the Chickahominy, Cedar Mountain, Manassas, Boonsborough, Sharpsburg, Perryville, Corinth and Federicksburg. A sketch of the principal incidents marking the history of the present year is added; with a review of the aspects of the war at the close of the campaign into Pennsylvania. We have read it throughout with interest, and in relation to some points with access of light; but we could wish that the author had spared us the pain of certain passages, written in obvious disregard of the Divine injunction, “Thou shalt not speak evil of the ruler of thy people.”

Pollard is known as a sometimes-critic of Confederate President Jefferson Davis, making many white Southern elites and divines squirm. Among such leading lights who live in a world of Southern aristocracy, criticism of the leaders and social order of the South is impolite. Following the defeat of the South in the war, this same attitude comes to prevail upon the white South at large as open criticisms of the (former) Confederacy, its military and political leaders and its slave-based social order and economic system are widely deemed inappropriate. After all, whites are superior to blacks, and the Confederacy was faithful to God during the war in terms of upholding God’s design of racial separation.

Pollard publishes one more war-time volume, The Third Year of the War, but not until 1865, and the publisher is a New York firm. The third year was painful enough for Southern whites, the fourth year intolerable; Pollard ignores it.

After the war, however, and despite his war-time criticisms of Jefferson Davis, Pollard turns his attention to formalizing the post-war Southern white narrative that had been percolating since at least late 1863. History remembers Pollard as the author of the enormously influential post-war (1866) volume, The Lost Cause: A New Southern History of the War of the Confederates. In this volume, Pollard discards war-time white Southern claims that African slavery was the cause of the war, instead constructing a story of an innocent South, protector of hapless negro “servants,” victimized by militarily-superior Northern states who coveted the South’s riches.

Having injected the language of “Lost Cause” into the marrow of the white, post-war South, Pollard follows up with a second volume in 1868: The Lost Cause Regained. This second volume reassures the superior race that white supremacy over blacks has always been God’s will, that the war with the tyrannical, greedy North was a righteous war, and that blacks will always be an inferior, unworthy race. In short, the Lost Cause of the war against the North is not really a defeat; instead, at a time when the North is trying to reconstruct the South, the noble Cause continues in white efforts to righteously maintain the subjugation and separation of the black race.

Collectively, Pollard’s interpretation of the war and the aftermath, a narrative built upon the unflagging mythology of white supremacy, becomes the guiding, triumphant principle of white-controlled Southern society, culture and politics for another 100 years.