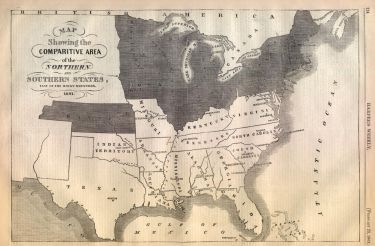 By now the South is a vast battlefield with only a few pockets of safety.

Virginia is increasingly overrun by the enemy. From the Shenandoah Valley to Petersburg and further eastward, Northern armies are embedded in the Old Dominion, easily outnumbering Confederate defenders.

Much of coastal North Carolina is under Union control, while periodical forays into the state’s interior have created a state of fear and unrest. Adding insult to injury, more and more North Carolinians, whites and escaped blacks, are taking up arms for the Union.

South Carolina, the heart of the Confederacy, long ago lost control of most of her coastal areas. More recently, the critical port city of Charleston, long-blockaded, has been under siege by Union forces for most of the year.

Tennessee, exhibiting divided loyalties throughout the war, is now largely under Union control and has a Unionist Reconstruction government.

North Georgia has been overrun by Union armies, Atlanta is besieged, and even Middle Georgia has been visited by battles. Only the southern portion of the state remains out of the reach of the invading Northern foes.

Texas, furtherest to the west, is least directly impacted by the war. Yet the state’s coast is blockaded by the Union Navy, while her landmass is effectively cut off from the rest of the Confederacy by Union control of the Mississippi River.

Today is just such a day in the United States.

One of many fast day sermons delivered this day is in the Lima Baptist Church, New York. Daniel Steele, a Genesee College professor and a Methodist, is the preacher. Titled “Two rebellions: Benjamin and American slaveholders,” it is a searing indictment of the slave-based Confederacy.

For three years and three months War has wasted our land, depleted our treasuries, and drank up our blood. Our battle fields begin to be enumerated by the thousands, our slain by hundreds of thousands, and our mourning ones by millions; and the end is not yet. When our flag was stricken down and our fair name became a bye word among the nations, and the heritage of our fathers’ toil and blood was assailed and about to be wrested from us, when law was trampled on, and freedom mocked, and God’s ordinanco of civil government despised, we thought we wore doing God’s service, by putting the war trumpet to our lips, to summon the slumbering millions to arms. Myriads have listened to tho call, dropped the sickle and the hammer, and rushed to their country’s defence. Vast armies have melted away as Northern snows disappear beneath the breath of tho South wind. A continuous line of soldiers’ graves extends from tho Chesapeake to the Rio Grande, from Cairo to tho Gulf; cripples hobble on crutches through every street, the wounded crowd every hospital; widows sit solitary in every hamlet, and little children every where watch at the gate for returnless fathers. The nation’s credit is sustaining a tremendous strain, and some look to see tho cable sundered from the anchor and the ship go to pieces upon the lee shore of bankruptcy. What shall we do ? Our good captain summons the ship’s company together to call upon the God who rides upon the roaring seas, to deliver us. In this hour of gloom, the nation feels its weakness and knows its tower of strength. This is one ray of light. Were there a universal, heartfelt, humiliation before the Lord and a crying to him for deliverance, the day would break, the sun would rise upon America. But let the few who are assembled before the Lord take courage from the promise that the prayers of even ten righteous shall save the city. Let us turn to the word of God for counsel. To the Christian patriot who prayerfully studies the sacred page, for guidance in this dark day of his country, how distinctly do the guide boards and finger-points become, how luminous the lighthouses, and how clearly shine the beacons from afar on the mountain tops….

Later, in the midst of a survey of and discourse about African slavery, Steele declares:

….It [the slaveholder aristocracy] is a resistless political power, because it is a unit, and because it unscrupulously allies itself with all other forms of wickedness which seek to be shielded from justice. Let us therefore strengthen the hands of our President whose avowed scheme for the pacification of the civil war and the restoration of the Union always embraces the destruction of American Slavery as a cardinal element. God bless Abraham Lincoln, and let him live to see the old flag float over a united republic with “no stripe erased, no star obscured” and no slave crouching beneath its ample folds….

….It is dark now, but faith beholds the light streaking the eastern sky. The rebellion must collapse before the resistless pressure of the Federal arms. Let no cowardly spirit unman our souls. Be strong. Quit yourselves like men. The great work of America’s deliverance is more than half wrought. We are still a mighty people. We are developing new resources every day. The descending rains foretell abundant harvests. Ships freighted with hearts confident in the glorious destiny of America, and with hands strong to achieve that destiny, are thronging our harbors. The pickax of the miner is daily revealing our exhaustless mineral wealth. Even the high price of gold is a blessing to our manufacturing interests by the protection it affords, stimulating an unprecedented energy, and rendering us independent of the world. The sudden expansion of our naval power astounds mankind. The nations tremble before the tread of our vast armies, and marvel at the miracle of a treasury like the Mississippi, for ever emptying itself, yet for ever full. The misruled millions of the old world hope in America’s success, their despots fear it, all believe it certain. Our soldiers universally die with no doubt respecting their country darkening their souls. Let us then have good courage. Fill up the ranks. Pour your money into the treasury, your supplies into the hospitals, and your prayers into the ears of God….

Baptists and Methodists of the North are in solidarity this day in the Lima Baptist Church.