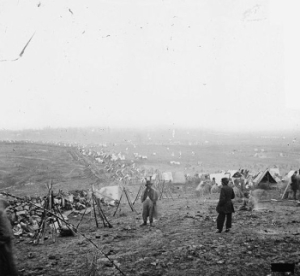 The very moods that one might argue have emerged in succession during the course of the war on the part of the Confederacy are all evident this very day in the Battle of Nashville.

Confederate General John Bell Hood, leading the Army of the Tennessee, has evidenced, against daunting odds, a heroic determination to change the late course of the war in favor of the South. Atlanta was a humiliating defeat for the general, while the intervening months have marked by failed strategies and yet more battlefield losses. But Hood is determined: Nashville will be different.

Movement begins under the cover of darkness as Union troops march out of the city to attack the army that has been waiting nearby for two weeks. Heavily fortified though Hood’s army is, wave after wave of successful Federal attacks and charges turn the general’s mood from one of determination to that of desperation. As night falls and the day’s fighting ends, the Confederates have been pushed back two miles from their initial positions.

Defiant, Hood, his army having suffered thousands of casualties, fortifies again. Nashville must be his. The Confederacy is counting on it.

The Confederacy is also counting on religious newspapers, according to an editorial in the (secular) Augusta (Ga.) Register that is reprinted in this week’s North Carolina Baptist Biblical Recorder.

From the bottom of our heart, we wish every religious paper in the Confederacy success. Never did we need more than now their elevating moral influence in giving tone to public sentiment. We exchange with papers of every denomination, and can truthfully say amongst our long list of exchanges we place religious papers first, and we have been indebted to them for some of the best productions that have ever graced our columns. Shame on any denomination that will not sustain its church paper! What is the pitiful sum of $20 — or $40 — per annum, compared with the good secured?

Southern Baptist state papers are doing their part, preaching the holiness of black slavery and remaining defiantly opposed to the Northern abolitionist enemy.