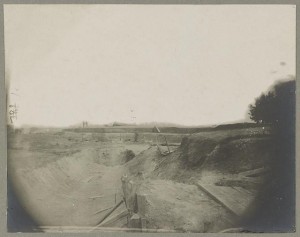 The critical battle for control of Petersburg rages on. Union forces continue expanding their lines, placing greater pressure on Confederate defenders. The trench warfare that is now taking place, a newer development in the war, is becoming an important battlefield strategy for the Union. By pinning down the enemy, the Federals can continue their war of attrition against a much smaller force which has not the means to significantly replenish men lost in battle.

Well-supplied and with reserves as needed, Union forces have settled into their positions for as long as it takes to squeeze off Petersburg from Richmond, the Confederate capital. As goes Petersburg, so goes Richmond, a mere ten miles distant.

The Richmond Examiner, trying to keep up with the latest information from the nearby battlefield, publishes the following bit of news this day:

At nine o’clock last night a gentleman just from the vicinity of the front reported that the fight was still progressing, and that we were driving the enemy rapidly. We had forced him from the vicinity of the railroad back to and across the Jerusalem plank road, a distance of four miles. It was discovered as we moved that the enemy had many lines of breastworks, extending easterly from the main line around the city, to prevent flank movements, but from each of these he was handsomely driven.

After being forced from the two first lines, the enemy were reinforced and made an effort to recapture them; but our troops turned their own guns upon them (many having left their muskets when they fled), and repelled them in gallant style.

Batches of prisoners continued to arrive up to the latest accounts; and a gentleman who left the vicinity of the battle at dark thinks our total captures will reach two thousand five hundred.

A large number of the enemy were killed and wounded, all of whom were left in our hands. Our casualties will be heavy, but the most of them, we are pleased to hear, are only slightly wounded.

Military men regard the affair of yesterday as one of the most brilliant of the war, the numbers engaged considered.

While Southerners on a daily basis anxiously await for news of battles to filter down to their cities, towns and farms, Baptist newspapers of the South weekly remind their readers of the importance of the evangelization of Confederate soldiers. Some Georgia Baptists this day read Christian Index editor Samuel Boykin‘s latest commentary concerning army missions.

Army colportage, Boykin declares, is now the most important issue in the Confederate States of America. Using flowery language and patriotic exaggeration, the Baptist editor builds up the soldiers of the South before lamenting the need to evangelize chivalrize defenders of Christian civilization.

But briefly did we touch in our last issue upon the subject of army colportage, and that for the reason that we felt unable to do the subject justice at the time; and we refer to it now, because it looms up before the mind’s eye, in importance second to no other matter requiring attention, in the Confederacy.

A glance at our army beholds a body of men, noble, reliant, confident, self-sacrificing, at once the honor and glory and only palladium of our country. Rank and file, it can exhibit a nobler average of humanity than ever gathered beneath hostile banner or waved ensign in face of foul invader; composed indeed of Southern chivalry, it is constituted of those who fully appreciate the mighty interests for which we struggle–men capable of being influenced beyond all other inducements by moral incentives, that highest, mightiest, and most august stimulus by which the mind can be incited to noble daring and lofty achievement. They have been reared amid cultivation, refinement and virtues; over them religion has thrown its benign influence; and they have been taught to revere the truths of the Bible and to honor the dictates of morality. And it is because they are thus superior to their foes and so susceptible of the loftiest instinct’s of our nature, that they form a soldiery in which the nation may repose hope and confidence–which hope and which confidence are based upon the belief that these men properly estimate the august issues for which they fight, and that an all-controlling, never yielding spirit animates them, which reads victory in the skies and prefers death to defeat. As long as that spirit animates them, will they be invincible, and our land may be considered safe; and around the flag of our country may we twine the garland of hope, wreathed with the flower of peace, security and happiness.

Behold that world-famous band of veterans, with whom is is but child’s play to keep at bay a horde of Northern hirelings, and who, with the might of a giant, as though in sport, rends to pieces army after army! For three years have they proved the sure bulwark of our Capital, and there they stand yet, as proudly confident and as gloriously victorious as ever. The spirit that animated them was a spirit determined not to know defeat; and this spirit, this heaven-born morale, which, through Winter’s storm and Summer’s glow,–through privations sore and trials keen–through the battle’s storm and on the weary march, has upheld and encouraged them, may be attributed to those Christianizing influences which have been brought to bear upon their souls. Thus has the power of religion, operated upon the hearts of our soldiers, animating, inspiriting and arousing them to a high pitch of patriotic enthusiasm, been doubtless, the great means of preserving the destinies of our Confederacy; for it is the Christian soldier who becomes the hero. His soul is fired with a death-defying glow; poltroonery is spurned with contempt; duty, patriotism, and love for home and dear ones fire his heart with unquenchable ardor; and fear is cast from his bosom, because the hope of eternal life rends the sky over his head and gives an insight into the glories that lie beyond the grave. For such soldiers victory is a foregone conclusion; and beneath the wavings of their banner may safely repose the hopes and joys of our country.

It is for this reason that we say that the evangelization of our armies is a subject second in importance to no other requiring our attention at this time–that it looms up before the mind’s eye with an importance coordinate with the sublimest interests of our Confederacy. For in effecting that evangelization we but perfect the morale of our troops; and upon that morale depends our all. While it is buoyant and exsuscitating, the ship of national safety will ride the waves in triumph; but, let that morale decline,–let that spark divine but expire, and drooping freedom will soon mourn her shackled wrists, and hang her dejected head in tearful grief.

To the utmost of your capacity, then, Baptists, let it be your duty and delight to minister to the spiritual wants of your army. Pour out your money like water for for supporting your missionaries. Roll up the funds for meeting all the necessary expenses of those organizations which are so engaged in this great work–the Army Colportage Board of Virginia and the Domestic Board of the Southern Baptist Convention. These two organizations are already in highly efficient operation, and you should enable them to go through the Summer campaigns with every advantage for reaping a rich harvest. Away with your doubts and fears and hesitation! We tell you this is a war for national life, and, amidst every phase of good or ill success must it be borne onward and pressed forward, until glory’s halo of success, like coruscating beams around the rising God of day, casts resplendent lustre around our risen sun of liberty and independence.

Such words as “whipped” and “conquered” must be scoured indignantly from our vocabulary; and a cheerful and fixed determination to succeed in the maintenance of our rights must animate us, until from beneath this lurid storm of war we pluck the inheritance left by our fathers, and set it basking in the glorious sunshine of peace and prosperity.

Behold glorious old Virginia! Bellona’s red car has driven its bloody wheels over each portion of her brave old breast, and yet there she stands as determined, as cheerful and as unconquerable as ever. She has known war; and amid its desolations, she still proudly lifts her head, crowned as it is with immortal honors, and with undaunted mien, she bravely clasps the naked and bloody sword, and breathes forth in defiant strains, “Sic semper tyrannis.” Imitate her example, ye who love home and country and liberty, and all will be yet well.

Christianity in exclusive service of the “rights” of white supremacists thus remains non-negotiable to Boykin and many other Southern Baptist elites. True religion knows no other way.