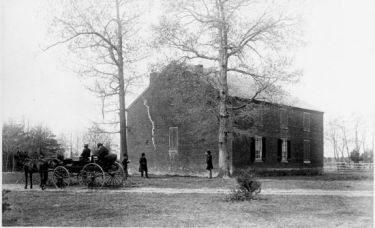 The war has displaced many families North, South and in-between. The later includes the Wallace family of Paducah, Kentucky,  an Upper South state that opted for neutrality rather than join the Confederacy. Philip Hugh Wallace practiced law prior to the war, earning a good living for his family thanks to the slave-based economy of the South.

Baptists, the Wallaces’ family life was quickly disrupted with the onset of war, despite Kentucky’s neutrality. Like some other prominent Kentuckians, Wallace opted to serve in the military on the side of the Confederacy, joining General Braxton Bragg‘s division shortly after the birth of his first child, George Clayton Wallace. Entrusted with the care of George, Philip’s wife Frances Woolfolk did the best she could for three long years.

Finally, in desperation to see her husband, Frances, George and a cousin, Amanda (Mally) Woolfolk, and her children set out two months ago on a journey southward to visit their mates.

The journey has been slow but steady, with Frances and Molly enjoying visits with family along the way, meeting new friends, and taking in the scenery. And like many good Baptists, they do not neglect church attendance on Sundays. Whether attending a Baptist congregation or visiting a church of another denomination, the Sabbath is a special time as the women travel to visit their husbands.

Frances maintains a journal of their travels, and today she summarizes their Sabbath activities.

Another beautiful Sabbath–Glory be to God on high, peace goodwill towards all men. Mally, the children, and I go to the Presbyterian Church this morning, in the afternoon to the Baptist Church for prayer meeting, where we heard the most earnest prayers offered in behalf of our country. I took a walk retired early.

Doubtless, many white Baptist congregations this day offer prayers on behalf of their beloved Confederacy. Yet few if any white prayees petition for peace and goodwill, much less freedom, for black Baptists, or blacks of any kind.