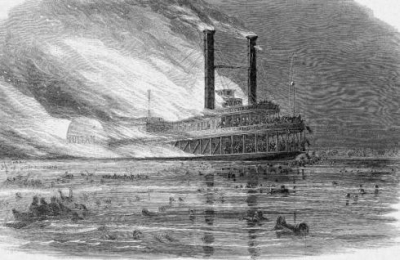 SS Sultana in flames before sinking with great loss of life. (Library of Congress)

The worst disaster in American Maritime history occurs today in the Mississippi River, exceeding even that of the Titanic many years later.

During the war the steamship Sultana plied the Mississippi between St. Louis and New Orleans, often carrying military personnel. Now, with the war effectively over (former Confederate president Jefferson Davis yet in hiding and some armies not yet disbanded), the ship, with a stated capacity of 376, is carrying nearly 2,100 passengers, most repatriated Union prisoners recently released from the prison camps at Cahaba (Alabama) and Andersonville (Georgia). The former prisoners boarded on April 24 at Vicksburg, immediately after repairs were made to the steamer’s leaky boilers.

Today the overcrowded Sultana stops in Memphis to make additional repairs, then resumes her upriver travels towards Cairo, Illinois. A mere seven miles north of Memphis, however, the boilers suddenly burst, ripping apart the ship’s midsection. Some passengers are engulfed in flames, some thrown overboard, and still others trapped on the burning ship. As the ship slowly breaks apart, lists and sinks, some survivors jump aboard, bobbing for hours in the frigid water.

This terrible disaster ends with an official count of 1,547 dead, although modern historians place the figure as high as 1,800. Most of the dead are soldiers who, having managed to survive the horrid conditions of Confederate prison camps, were eager to see their families again.

The tragedy, however, receives little attention in newspapers at the time, likely due to national fatigue over enormous death tolls due to the war and the recent assassination of Abraham Lincoln, whose remains are yet en route to his home state of Illinois in a funeral train that stops each day to allow mourners to view his body (today’s stop being Buffalo, New York).

A military commission investigating the sinking of the Sultana later concludes that faulty repairs to the ship’s boilers and overcrowding led to the explosion. Although Captain Frederick Speed receives a court-martial, it is later revoked.

While the Sultana sinks and Lincoln‘s remains are viewed by citizens of Buffalo, a memorial service for the former president is held at New York’s Berean Baptist Church. The New York Times reports of the meeting:

The members of the Berean Baptist church, (Rev. Dr. DOWLING) held a memorial meeting last evening, for the purpose of adopting appropriate resolutions and listening to addresses on the death of President LINCOLN.

The Rev. Dr. DOWLING was appointed chairman, and opened the exercises by reading the 64th psalm, followed by a prayer from the Rev. ISAAC ORCHARD. The chairman said that he would not make an extended speech in relation to the death of our beloved President. He would leave to others the duty of giving expression to the lamentable occurrence, the meeting had been called for the purpose of showing their appreciation of the character of the man who was called upon to fill the honorable position of President; and whose life had been sacrificed by a desperate villain. The speaker recounted the circumstances attending the death of BOOTH, exactly similar in physical circumstances as the wound by which Mr. LINCOLN died. But how different the moral circumstances of their deaths. One goes to an honored grave, lamented by millions, while the name of the other will be handed down to posterity as the synonym of all that is vile and execrable. The death of BOOTH will deter others from attempting to take the life of our present honored President, while if he had escaped unwhipt of justice, the lives of Gen. GRANT, the President and other great men might have also been sacrificed.

The Chairman introduced Gen. HIRAM WALBRIDGE, who made an eloquent and impressive address. He said:

Gen. WALBRIDGE was listened to with marked attention, and frequently applauded.

A series of resolutions were adopted, expressing the abhorrence and detestation of the crime in which the deed was held by those present; assenting to the sentiment of President JOHNSON, that treason is the highest crime, and should be punished; recognizing in the new President a man qualified for utterly exterminating the rebellion, and pledging him their support; thanking God for raising up ABRAHAM LINCOLN, and sparing his life until his life-work was done, and the flag was replaced on Fort Sumter, and approving of the project of erecting a monument by one-dollar subscriptions, to our lamented President, in this city.

Eloquent speeches were also made by WILLIAM OLAND BOURNE and Mr. CAULKINS.

The essential sentiments voiced in the Berean Baptist Church are seemingly shared by most other Baptists of the North.