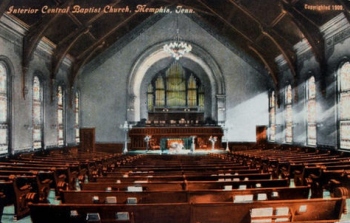 Today a new Baptist congregation is founded in the South. Unlike most in the immediate post-war years of the South, it is a white congregation.

In the southern section of Memphis, Tennessee on the corner of Adams and Second Streets, the Central Baptist Church is established. For some years, no other white Baptist church had existed in this part of town. Even so, many members of the First Baptist Church live in the area, and it is they, along with former members of Beale Street Baptist Church that closed years ago, who form the new congregation. The 118 founding members vote Rev. S. H. Ford as the church’s first pastor.

Due to financial difficulties in the post-war era, the congregation does not complete a permanent building until 1885.

The church remains an active and thriving congregation in the 21st century.