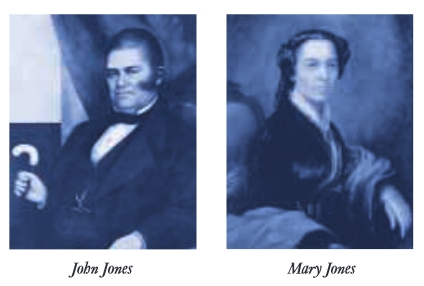 Prior to the war and despite the growing abolitionist movement, discriminatory laws against black citizens were common in the North. Known as “black laws,” the regulations often prevented blacks from voting, serving on juries, testifying in court against a white person or signing contracts.

Freedom, in short, while real nonetheless came with restrictions for black Northerners.

Few cities were more abolitionist-friendly than Chicago. Sometimes referred to as “a sinkhole of abolition,” Chicago often hosted John Brown and Frederick Douglass and contained several stops along the Underground Railroad. Even so, black laws restricted the rights of Chicago’s black citizens.

By the war years, the Olivet Baptist Church was the most influential African church in Chicago. Church co-founder and trustee John Jones was one of Illinois’ leading abolitionists.

Born as a free black in North Carolina about 1816, John moved to Illinois in 1844 and married Mary Richardson, also a free black. The couple settled in Chicago in 1845, where John helped found the Olivet Baptist Church, the second oldest church in the city.

Beginning in 1847, John and Mary publicly campaigned for repeal of the state’s black laws. The Emancipation Proclamation of January 1, 1863 led Chicago’s abolitionists to redouble their repeal efforts. Jones in 1864 published a pamphlet entitled “The Black Laws of Illinois and a Few Reasons Why They Should be Repealed.”

Today, less than a week after the U.S. congress and president signed the 13th Amendment abolishing slavery, the dreams of John and Mary Jones and other black citizens of Illinois are finally realized. The state Senate and House having recently voted in favor of repeal, Governor Richard J. Oglesby signs the repeal of the Illinois black laws.

At long last black citizens of Illinois can enjoy freedom on parity with whites.

But even as Northern states expand the freedom of black citizens, today’s Richmond Daily Dispatch insists in vivid language that white Southerners will never grant freedom to their slaves and will never agree to reunite with the abolitionist North, a sentiment shared by many Baptist leaders in the South.

In yesterday’s Dispatch we published the late legislation of the Yankee Congress abolishing slavery, and the scenes attending its adoption. The proposition which that body has passed is for the incorporation into the Constitution of an amendment ordaining that “neither slavery nor involuntary servitude, except as a punishment for crime, whereof the party shall have been duly convicted, shall exist within the United States, or any place subject to their jurisdiction.” In order to be incorporated in the Constitution, the amendment must be ratified by a majority in each House of the Legislatures of three-fourths of the thirty-six States belonging to the Union, of which (the Yankees having twenty-eight States) there can be no doubt.

If we had ever doubted that this was one of their Revolutions, not designed to go backward, if we had ever harbored a suspicion that reconstruction of the old Union was within the limits of possibility, or that a beneficent Heaven had led us forth from the land of Egypt only to return to the dominion of Pharaoh, the crowning consummation of the Abolition triumph has set at rest forever this idle and unworthy thought. The hand of Heaven has written on the wall the eternal separation of the United States, and no Confederate man will longer even desire to join together that which God hath put asunder.

From the bottom of our heart we thank the Federal Congress for this most timely and decisive legislation. We assure them that it did not come a moment too soon; that it is not in any way too stringent or too sweeping. We look upon it as the manifest hand of Heaven interposed in the very way, and at the very hour, that our condition required. It is a greater boon to us than a grand victory in the field. We echo back the shouts of delight that rang through the House of Representatives. We should like to see gun for gun fired with their frantic population in honor of the event, only that we wish to save our gunpowder and give them shotted salutes on the battle-field. Do these Chinese summer-set-turners and tom-tom-beaters ever-reflect that the Confederate people have never yet fired a salute in honor of any of the magnificent victories we have gained these four years? Do they see the difference between men and children? If we do not now ring all our bells, fire all our cannon, sing Te Deum in all our churches, it is not because there is no music, joy and gratitude in our hearts. Just the right thing, and just the right time.

‘ “I thank thee, Roderick, for the word.
It nerves my heart, it steels my sword.”‘

It was but a few days ago that the military organ of the United States conceded that the Southern Confederacy could not be subjugated by simple force; that it was upon the overthrow of its “will,” of its “moral Strength,” that the United States relied for its conquest. If ever there was a time when its “will” was weakened, or its “moral Strength” decayed,–thanks to that Abolition Congress — thanks to Lincoln and Seward’s reply to our commissioners — it stands now upon a Gibraltar. Henceforth the most sordid spirit in the whole Confederacy will not dream of reconstruction; the veriest poltroon will be brave. The dream of a re-united country will vanish even from lunatic asylums, and every eye will see in the face from which the Federal mask has been dropped by itself the undisguised features of the Thug and the Devil.–They will have our property, our lands, our lives. Will they? Let them come and take them.

The United Sates Congress has abolished slavery in the United States. We could laugh at their folly, if gratitude for the service they have rendered us did not forbid us to treat our benefactors with irreverence. Why did they not abolish it in Dahomey? Why do they not command the sea to stand still, and say to the ocean, “Thus far shalt thou come, and no further?” Our very slaves will teach them to respect their rights. Let them make good their laws by deeds instead of words. We are going to resist them henceforth as one man, and to defend our hearthstones and our lives as men do who have no hope but in God and in their own right arms. The “moral strength” of the Confederacy is this day restored as by a miracle. Laus Deo! We shall maintain our cause, our institutions, the integrity of our soldiers. We ask no more for peace, nor do we expect it, nor will we have it whilst the foot of a Yankee soldier pollutes this soil, or a hostile Yankee flag is unfurled on this continent.

Bold words, but futile. The die has been cast, the South is destined for defeat.

Subjugation of the conquered, however, is to be a bit trickier. Following the war Northern politicians for a season work to force white Southerners to accept blacks on equal terms. But in the end, Northern efforts to ensure some semblance of racial parity are no match for the hatred that Southern white supremacists harbor for the now-free blacks in their midst, a hatred buttressed by racial superiority and often expressed in violence.

All to soon an unbowed white supremacist culture and society makes life a living hell for most blacks in the South, the late 19th and early 20th century restrictions imposed on black citizens much harsher than Northern black laws of the early 19th century. Freedom, it seems, is an empty shell of a word for blacks in the post-war South.

Meanwhile in 1871, the former abolitionist John Jones of Illinois is elected to state office, one of the first African Americans to hold public office in that northern state. Whereas the few blacks who serve in public office in the South following the war and due to Northern muscle are soon run off by re-ascendent Southern white supremacists, racial relations gradually progress in the North.