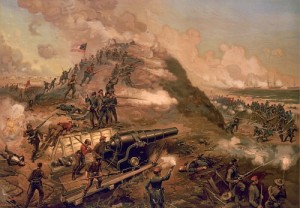 On this third day of the Second Battle of Fort Fisher, the Federals prevail.

Additional Confederate troops arrive on the battlefield this morning, but at midday even more Union troops land ashore in the form of some 2,200 sailors and marines.

At about 3:30 the naval bombardment ends and the Federal’s land assault upon the fort begins. For the next six hours fierce fighting takes place, including hand-to-hand combat in some instances. Inch by inch, Union forces gain ground on the Rebels. Fairly evenly matched with the Confederate defenders numerically, the Federals suffer greater losses but by 10 PM the Confederates surrender the fort to the foe.

As is the case with many battles this second half of the war, U.S. colored troops fight bravely and effectively and help secure victory in the battle.

The capture of Fort Fisher effectively shuts down the nearby port city of Wilmington, the South’s last remaining sea port. With Wilmington sealed off, the Confederacy is cut off from global trade. Any hope of Europe recognizing the legitimacy of the Confederacy is lost, and with it, some realize, any hope of winning the war is gone. A tattered Confederacy, in short is unable to stand alone against a United States military that continues to gain in strength.

Many white Christians in the South, however, yet want to believe that victory is possible. As has been the case all along during this war, Southern Baptist newspaper editors call for more prayer by the people.

Of the fall of Fort Fisher, the North Carolina Biblical Recorder declares:

The morning the news of the fall of Fort Fisher came to hand, it found very many sad indeed. An aged man among us felt that it was more than he could bear. He hastened to his closet to pour out his soul in prayer. His hope had never failed him before; his faith had never wavered. Now he was sick and faint. Some evenings after he rose in his place at the little prayer meeting, and told his brethren that he had never felt “so strong as after that prayer.” The grey-haired father! some of us will never forget his look, nor the tones of calm confidence with which he inspired us.—Younger men would do well to be strengthened as he. They will be, if they pray.