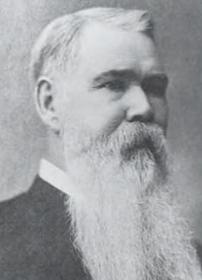 The war interrupted Johnson’s ministerial training as he enlisted in Company B, Sixteenth Regiment, Louisiana Infantry. Fighting in Shiloh (April 1862) and other western theater battles, Johnson rose to the rank of captain prior to being captured at Nashville in December 1864, where he remained until his release by Union officials.

Returning to the ministry in Louisiana, Johnson is called to pastor the First Baptist Church of Clinton in 1868. For the next fifteen years he pastors various churches, first in Louisiana, then in Texas.

Schisms, however, descend upon Texas Baptist life. Finding himself in prolonged disagreements with other Texas Baptist leaders in the 1890s, Hayden leaves the Baptist General Convention of Texas (Southern Baptist) and aligns with the Baptist Missionary Association (Landmark) in 1902. Yet later he seeks reconciliation of Baptists in Texas. Although harmony among Texas Baptists does not come to pass, before his death Hayden personally puts behind him the bitter controversies which had consumed some two decades of his life.