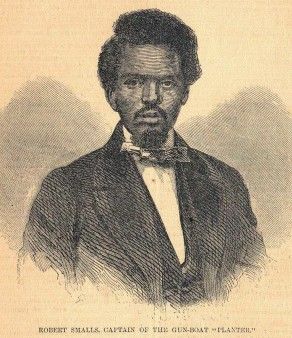 Today Robert Smalls, a hero of the war, is discharged from military service.

Smalls is a former slave who during the war daringly escaped from slavery in Charleston by capturing a Confederate steamer, the Planter. His heroics were celebrated throughout the North, where he conducted speaking tours. In addition, he was made captain of the then-Union Planter, displaying his courage in combating enemy craft.

A Baptist layman, in the years to come Smalls returns to his native South Carolina, where he becomes first a state legislature and then a five-term United States congressman. During his civil and political career Smalls advocates for mandatory public education for all children, as well as equal travel accommodations and land (confiscated by the Federal government during the war) for African Americans. He is remembered as one of the foremost African American politicians in 19th century America, his name adorning a number of buildings in his hometown of Beaufort.

Meanwhile far to the West in Austin, Texas, the state government has fallen apart. Chaos characterizes the state’s capital city.

Suddenly, under a full moon the church bell of the First Baptist Church begins ringing. It is a Sunday, but the bell’s pealing does not signal a worship service.

Rather, bandits have broken into the Treasury Building next to the state Capitol building. A former Confederate cavalry Captain, George R. Freeman, rounds up some men. They charge down the hill from the church and accost the robbers. A firefight ensues, with the bandits, excepting one, managing to escape with a large heist of silver coins. The one remaining robber, wounded, soon dies, without revealing the identities of the thieves. It is suspected that local bad men, possibly former Confederate soldiers, are the culprits.

The money is never recovered. “The Great Treasury Raid of 1865” remains unsolved to this day.