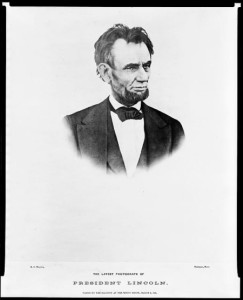 The last photograph of Abraham Lincoln

These are days of intense soul searching, South and North. Although Confederate leaders and large slaveholders (often one and the same) remain largely defiant, many White citizens of the Confederacy have given up all hope and anxiously await for the war’s conclusion. Some are angry with the North for wreaking havoc upon the South, while others begrudge planter elites for having led their homeland down a path of destruction. Meanwhile, Black southerners, both freedmen and slaves, relish a future of freedom.

Northern souls are more lighthearted than they have been in years, reflecting widespread confidence that the war is within weeks or less of concluding. Feelings of relief and joy, however, cannot mitigate the sorrows of families who have lost loved ones to the war, and the anxiety in households where husbands, sons, fathers and brothers are yet in uniform. Black northerners are proud of their contributions to the freeing of their brothers from bondage, and joyful that northern racism is receding.

God, as usual, is everywhere. For White southerners, from God the defiant wrest resolve, the sorrowful find solace, and the resigned glean hope. For Black southerners, God is the powerful redeemer who is leading them into the promised land through their Moses (Lincoln) and the armies of the North. To many Northerners, God is the champion of freedom and equality and the righteous judge of the slave-based South.

Some wrestle with God more than others, perhaps none more so than Abraham Lincoln. The U.S. president, having been introduced to God as a youngster in Baptist congregations, has probed the depths of theological thought throughout the war. Never as confident in the knowing of God’s will as many of his contemporaries North or South, Lincoln views the deity as steering the ultimate affairs of humankind for the good, even if His ways of so doing are often mysterious, and His will never fully comprehended by mere humans.

Today the president writes a letter, one of many during the war, in which he turns to the subject of God’s will. The recipient is a Thurlow Weed, a New York newspaper publisher and moderate Republican who has openly been critical of the Emancipation Proclamation and Lincoln’s radical abolitionist views.

Thurlow Weed, Esq Executive Mansion,
My dear Sir. Washington, March 15, 1865.
Every one likes a compliment. Thank you for yours on my little notification speech, and on the recent Inaugeral Address. I expect the latter to wear as well as—perhaps better than—any thing I have produced; but I believe it is not immediately popular. Men are not flattered by being shown that there has been a difference of purpose between the Almighty and them. To deny it, however, in this case, is to deny that there is a God governing the world. It is a truth which I thought needed to be told; and as whatever of humiliation there is in it, falls most directly on myself, I thought others might afford for me to tell it. Yours truly