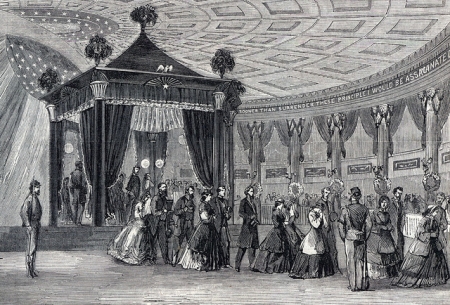 Seven states and 180 cities following the funeral train’s departure on April 21 from Washington, D.C., Abraham Lincoln‘s body is buried today in his hometown of Springfield, Illinois in a specially built tomb in Oak Ridge Cemetery. Son Willie’s coffin is laid next to that of his father. The only immediate family member is Lincoln’s eldest son Robert. Wife Mary and younger son Tad (Thomas) chose to remain at the White House.

This most solemn of occasions is marked by much formality, along with great grief and sorrow. A funeral sermon voices the pain of the moment, as well as the eternal gratitude of the American people for the great leader whose life was so unjustly snatched away at the pinnacle of his greatest triumph on behalf of the nation.

A simple country lawyer Abraham Lincoln had been in Springfield, yet the right man at the right time ascending to the presidency of the United States had put down the greatest threat ever to the Union, securing freedom and liberty for all Americans.

The final paragraph of the funeral sermon is:

Chieftain, farewell! The nation mourns thee. Mothers shall teach thy name to their lisping children. The youth of our land shall emulate thy virtues. Statesmen shall study thy record and learn lessons of wisdom. Mute though thy lips be, yet they still speak. Hushed is thy voice, but its echoes of liberty are ringing through the world, and the sons of bondage listen with joy. Prisoned thou art in death, and yet thou art marching abroad, and chains and manacles are bursting at thy touch. Thou didst fall not for thyself. The assassin had no hate for thee. Our hearts were aimed at, our national life was sought. We crown thee as our martyr, and humanity enthrones thee as her triumphant son.
Hero, Martyr, Friend, Farewell !

As Lincoln is buried, former Secretary of Treasurer and now Chief Justice of the United States Salmon P. Chase writes from Beaufort, North Carolina to President Andrew Johnson. The subject of his letter is the reconstruction of Southern states who resisted the Union until the bitter end.

….. We reached this place [Beaufort, N.C.] this morning. Dr. Fuller [Richard Fuller], the celebrated Baptist clergyman of Baltimore who is with me & whose history I suppose you are acquainted went into the town a few moments after we came & met several of the inhabitants. He says that they are all with inconsiderable exception, anxious for peace & the restoration of state government and looking to the National Government to tell them how it is to be restored. Two of the principle men have since called on me—one a State Senator under the rebel government & the other the Clerk of the Court. The Ex Senator has just come back to our lines, having been in the Legislature up to the time it was broken up. Both were extremely anxious to know what was to be done at Washington. I told them that I, of course, had no authority to speak; but that I thought that, in some way, the people would be expected to reorganize their own government; and said that as the colored people had been made citizens by enfranchisement it might be desired that they should take part as voters in the work of reorganization. The first part of this proposition they liked but not the last. The idea of blacks voting was evidently distasteful …. As to voting I reminded them that the blacks in North Carolina had the right to vote until about thirty years ago; and that nothing could be more natural than that, as the right was taken away in the interest of slavery it should be restored by the interest of Freedom. They did not dissent from this—but my general conclusion was that they would prefer to have the reorganization in their own hands & those of their friends; but that they would acquiesce in any mode of reorganization rather than see any more rebellion.

You can do what you think right and do it safely. In my judgment the most decided and prompt action is safest.

In Chase’s letter are hints at the struggles that lie ahead in the implementation of the legal rights of freedmen in the South. Ensuring the freedom legacy of Abraham Lincoln will be no easy task.