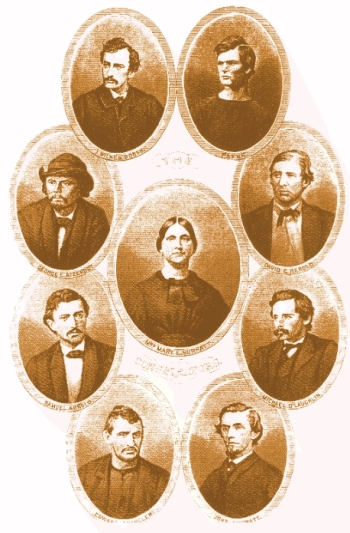 Two days after the body of former U.S. President Abraham Lincoln is laid to rest in his hometown of Springfield, Illinois, current President Andrew Johnson issues an executive order for a military trial for eight named co-conspirators in the murder of Lincoln and the attempted murder of Secretary of State William H. Seward and other unnamed Washington officials. The eight are: David E. Herold, George A. Atzerodt, Lewis Payne, Michael O’Laughlin, Edward Spangler, Samuel Arnold, Mary E. Surratt, and Samuel A. Mudd.

The man who pulled the trigger, John Wilkes Booth, is not listed, having only recently died while resisting arrest in Virginia.

Yet even with Booth already dead, the trial promises to be an event which commands the attention of a nation angry over the death of their beloved former president.

Outside of the national spotlight but important to local Baptists of Beckley, West Virginia, the city’s First Baptist Church restarts following a long period of dormancy caused by the war. Church meetings ceased in early October 1861 as members dispersed during the early months of the great conflict. During the war years Northern soldiers destroyed the meeting house, one of hundreds of Baptist churches to experience such an unfortunate fate.

Now, with the long war finally over, the church’s former pastor has returned home and is ready to resume preaching duties. As recorded in church minutes, “Elder M. Ellison, our former pastor, returned to his former home in Raleigh Court House and commenced an effort to revive our drooping cause preaching on the second Lord’s Day.”

In the years to come the church prospers one again, remaining in existence to the present day.