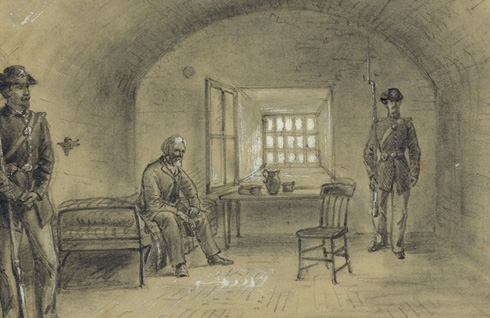 Another chapter closes on the Civil War this day with the capture of former Confederate president Jefferson Davis.

Fleeing southward, Davis is overtaken by Union cavalrymen in south Georgia near the community of Irwinville. His capture takes place without incident.

While significant, the event is somewhat anticlimactic. A traitor to his true country while having for four years been president of an illegitimate, self-declared nation, by the time of his capture Davis is a man isolated and poor, the wealth he previously commanded from the labor of the hundred slaves he owned now but a vapor.

Charged with treason, Davis is transferred to Fort Monroe in Virginia, where for two years he languishes in prison before being released on bail in May 1867, having not actually been tried for treason. Following his release Davis soon becomes a businessman and later speaks and writes about the Confederacy and the South, defending white supremacy and black slavery in promoting Lost Cause mythology. A hero to many white southerners, upon his death in 1889 a large crowd attends his funeral.

Also this day, in New Orleans the National Freedmen’s Relief Association takes charge of the Jefferson City Asylum, a black organization founded in 1863 and supported primarily by Negro Baptists. A number of Negro Baptist churches assist the operations of the asylum by providing clothing for the residents and furnishing nurses. They also help with repairs of the facilities.

The asylum has averaged fifty residents since its founding, and at this point has placed twenty-three orphans in the homes of black families. In the post-war years to come, black Baptists of New Orleans play an important role in advancing black institutions in the city.