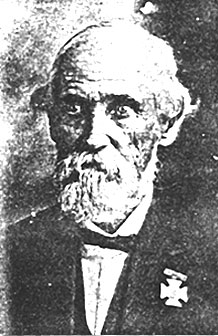 While officially over, the war continues winding down in many respects.

In the North, the United States government is in the midst of a military commission trial of the conspirators in Lincoln‘s assassination, while President Andrew Johnson and Congress are engaged in the beginning stages of the difficult task of reforming Southern state governments, the devil of which is in the details.

Southward, paroles of Confederate soldiers continue, and in some cases soldiers of the now-defunct Confederacy yet bear arms. Many of those who have surrendered and received their pardons are even now walking homeward, some emancipated almost to the point of being unrecognizable to their families.

And for some, the war really is over.

Former Confederate soldier and officer Edwin Hansford Rennolds Sr. (1839-1912), a Tennessean and having surrendered weeks ago, is now resting at home, thankful he survived the war.

Rennolds recounts the events of recent weeks, including his own bittersweet walk homeward following his surrender.

On April 24th, 1865 when ready to surrender there were present for duty of the 5th Tenn. Vol. Inf. only thirty men, out of thirteen hundred who had served in its rank and file…. When it was decided fully that the Army would be surrendered several of us who were supernumerary officers decided that nothing could be gained by remaining longer, and being desirous of getting ahead of the rush, and of getting home as soon as possible, obtained permission to leave the command and bidding good-bye to the comrades of four years turned our faces homeward with sad hearts. We had the same trouble with the broken railroads returning that we had in going.

Among those who returned together I can call to mind only Capt. B. F. Peeples, ensign J. W. Crutchfield, and Lts. N. C. Howard, T. C. Neill, and Private Van Thompson.

At one place while waiting for the train, two deaf and dumb men, from the N. C. Asylum came up on their way home, and wanting to know when the train would leave one of them wrote the question on his slate he looked around for some one to hand it to, that looked like he would give a civil answer, and selected Capt. Peeples. He could not have made a better selection had he personally known all of us.

After much walking over several gaps in R. R. between Greensboro and Chester we walked from Chester to Newberry then by rail to Abbeville, and walked to Washington, Ga. and by rail to Augusta where we found U. S. Officers sent by Gen.Sherman, to parole all soldiers there, and were paroled May 3rd. Went by rail to Atlanta where we found Federal Officers sent by Gen Wilson at Macon. These officers claimed that those at Augusta were acting without proper authority, and they paroled us again. They had a company of dismounted Cavalry sent by rail from Macon, and it looked strange to see them on guard duty while thousands of Confederate solders were coming in on the trains, and taking other trains or walking away.

We walked thence to Dalton (100 miles) over the R. R. that we had destroyed in October 1864. How we wished that it had not been done! At Dalton we took the train to Chattanooga, and then to Nashville.

At Nashville we with many others were required to take the oath of allegiance to the United States government, before we were allowed to go home. My place in the line was right under the Stars and Stripes the folds of which almost touched my head as it waved back and forth in the wind. How I loathed it! And what a bitter pill that oath was. We were then asked if we wanted lodging for the night, and we answered yes, and were told to fall into line, and were marched to the Penitentiary, and put under a shed in an outer enclosurer, and slept soundly, having been first given a slice of light-bread and a small piece of boiled meat.

Next morning as we marched out we were given a slice of lightbread, at the gate, then marched to the Depot, and put aboard the train under guard, to Johnsonville on the Tennessee River, reaching there near Sundown, and wishing to get out of the military lines before another day, I hurried to the Provost Marshals office, and secured a pass for us to cross the  River. There were seven of us. Lt. N. C. Howard, Van Thompson, J. W. Crutchfield — myself and a negroe. When we were ferried over the river in a skiff.

After walking two miles, we lay down under some trees in a citizens yard. As soon as it was daylight, next morning we started again. We reached Manlyville at noon. N. C. Howard went to his cousin’s Mr. Will Weasy’s and J. W. Crutchfield took Van Thompson and myself to his undle’s, Col. W. E. Travis’ for dinner, and Col. T. furnished Thompson and I a horse each, and Mr. V. one to N. C. Howard to ride home. At Paris we were the first to bring the knowledge of the actual collapse of the Confederate States. Here Lt. Howard seperated from us and Van Thompson and I rode on together.

At my father’s “Double Barnes”, by his lane, we saw my father and “Cousin Robert” (B. Rennolds) standing talking. As we rode up my father said, “What now?” and I replied that “The Confederacy is gone up”, and I have come home to stay.” It was astounding news to both of them, but only too true.

This was Sunday evening May 14th, 1865. I had been in the Army four years, lacking six days. The best four years of my life. But it was useless to “grieve over spilled milk”. I had come back with unimpared health, and without any broken bones, and this was worth being thankful for. I spent a week visiting, and resting, and then began to plan for the future.

Eventually Rennolds does gather his thoughts and begin anew. Marrying in 1866, he and wife Margaret begin raising a family. Rennolds becomes a Baptist in 1868, and is ordained to preach two years afterward. In 1882 the Rennolds family moves to Florida. Bivocational, Edwin farms and works as a salesman to earn a living. On the side he is interested in history, and in 1894 Rennolds is elected as the first Historical Secretary of the Florida Baptist Convention. In addition, his service in Florida Baptist life includes the position of acting editor of the Florida Baptist Witness newspaper. Rennolds also serves four terms as the chaplain of the Florida State Senate and a term as county surveyor. The Baptist minister passes away in Jacksonville, Florida in 1912.