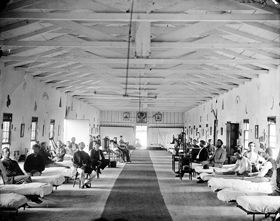 While men typically occupy the front lines of Civil War narratives, war-time hospitals created space for women to play significant roles. Millions of soldiers were injured during the war, with hundreds of thousands requiring hospitalization to various degrees. The sudden necessity of large volumes of nurses to work in the hundreds of temporary war-era hospitals trumped male reluctance to allow women to work among men in hospital settings.

Many of the nurses during the war years were Baptists, including Massachusetts native Mary T. Wildes (1836-1909). Married and living in Virginia by the late 1850s, she became a member of the Middle Street Baptist Church in Portsmouth, Virginia. In April 1863 her soldier husband died of disease in New Orleans. Perhaps motivated by the manner of her husband’s death, Wildes sought ways to help the war effort, and was subsequently “attached” to the General Hospital at Fort Monroe, Virginia, as a nurse on September 6, 1864. She has remained on duty ever since, attending to the sick and wounded during the closing months of the war and the weeks following the cessation of open hostilities.

Today, Mary Wildes retires from her nursing job in Portsmouth.

Her war-related service, however, does not yet end. From Virginia she moves to Florida, where she works with the Freedmen’s Bureau as a teacher “in schools for negroes.” Following some five years of teaching in the South, Wildes moves back to her native state of Massachusetts, settling down there for the remainder of her life.

Her life is one of many stories of Baptist women who devote a portion of their lives to the care of soldiers during the war and/or the betterment of freedmen immediately following the war.