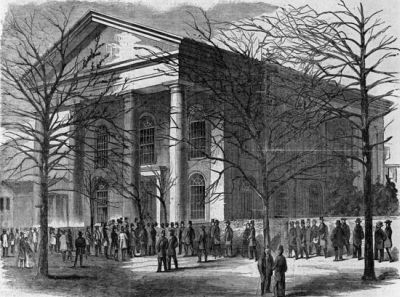 Today’s edition of Harper’s Weekly summarizes South Carolina’s Constitutional Convention, which took place in the First Baptist Church of Columbia, the same site of the opening of the 1860 South Carolina Secession Convention:

The South Carolina State Convention was convened in the Baptist Church at Columbia at noon September 13. The Convention consisted of 124 delegates, all of whom, with the exception of five or six, were present. Judge D. L. Wardlaw was elected President. No sooner had a committee been appointed to wait upon the Governor than Mr. Aldrich offered a resolution to the effect that South Carolina, while compelled to accept the situation now forced upon her, awaited her opportunity to throw off restraint. Fortunately for the State not more than four or five supporters could be found for Mr. Aldrich. Even Ex-Governor Pickens reminded Mr. Aldrich that bluster was hardly in their line just now. It being proposed that the rules for the convention of 1860 be adopted in this one, Mr. James L. Orr pointedly remarked that the less said about the 1860 Convention the better. — On the second day of the Convention Governor Perry’s Message was received. This Message advised a thorough remodeling of the State Government, so that all elections for State officers should proceed immediately from the people. The abolition of slavery was insisted on, while negro suffrage was repudiated.— On the third day the Convention repealed the Ordinance of Secession. A committee was appointed to memorialize the President in behalf of Davis, Stephens, Magrath, and Trenholm. — On the fourth day the following resolutions were introduced by Mr. Hammond:

Resolved, That the Union is the first and paramount consideration of the American people.

Resolved, That sovereignty, a unit absolute and indivisible, which, in all nations, must exist somewhere, resides in the American people, and its authorized representative within the limits of the organic law—the Constitution—is the Federal Government.

Resolved, That it is an uncontrovertible fact that slavery has ceased to exist through the exercise of the military power of the Federal Government, and that any attempt by us to revive it would be impolitic, unwise, and not only futile but disastrous.

Resolved, That it is true policy of the American people to confine the General Government strictly within the limits of the Constitution, and to acknowledge the inalienable right of each State to regulate its own affairs in its own way.

Resolved, That the late war was not one of an oppressed people against tyranny, but arose from an apprehension, on the part of the weaker section, of oppression and tyranny in the future, and was carried on under an honest conviction, coexistent among statesmen in every part of the country, with the adoption of the Constitution itself, that a State had the reserved right to revoke the powers it had delegated to the General Government, whenever, in the judgment of such State, there might be danger that those powers would be used to its disadvantage. The war, therefore, not having been strictly in the nature of rebellion or insurrection, we most respectfully suggest to his Excellency the President, the justice and wisdom of not enforcing the pains and penalties affixed to those crimes by the laws of the United States.

Resolved, That we indorse the acts of President Johnson’s administration, and will cordially support its wise and patriotic efforts to restore to the whole country the blessings of peace.

These resolutions were referred to a committee, and were not heard of again. —The sixth day was taken up in debating upon the prohibition of slavery. As on previous occasions, there were a few who wished to disturb the peaceful work of the Convention, but Mr. Orr and others talked pretty plainly in regard to the necessities of the case. After a little skirmish a clause was introduced into the Constitution declaring slavery in South Carolina abolished. —The Convention adjourned September 28, after fifteen days’ session, after having, besides the business already detailed, equalized the representation in the Senate and taxation throughout the State, given the election of Governor and Presidential electors to the people, ordered voting in the Legislature by viva voce, indorsed the Administration unanimously, and directed a commission to submit a code to the Legislature for the protection of the colored population.