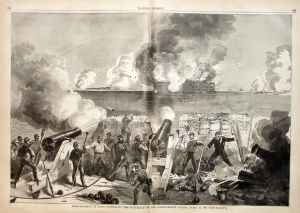 U.S. President Abraham Lincoln’s plan to resupply Fort Sumter is in motion, but the Confederacy has served notice that it will not allow the plan to proceed.

The time has come.

Beauregard consults with Secretary of War Leroy Walker, then sends the aides back to the fort, authorizing Chestnut to decide if Sumter should be taken by force. Anderson stalls, considering the alternatives. His small force is in a delicate situation, far outnumbered and unable to hold out for much longer under current circumstances.

Finally, about 3 a.m. on the 12th, Anderson announces his conditions. Colonel Chesnut, after conferring with the other aides, decides that Anderson’s conditions are “manifestly futile and not within the scope of the instructions verbally given to us.”

Beauregard’s aides depart Sumter and go to nearby Fort Johnson. From there, the war’s first shot will ring out in less than two hours.

The night is long in Washington, D.C. Lincoln waits expectantly, knowing that a horrible conflict is about to begin. The president’s faith, rooted in his Baptist upbringing, will help sustain him and a nation in the terrible years ahead.