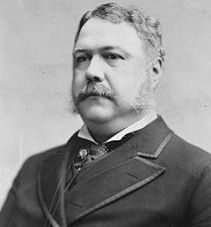 The future 21st president of the United States (1881-1885) would serve in political appointments during the Civil War. On April 4, 1862 he was appointed Inspector-General of the New York State Militia, then – on July 22 – Quartermaster-General. The positions carried the rank of brigadier general, and Arthur was responsible for raising, equipping, and dispatching state troops for the Federal government. He stepped aside from these duties in 1863, and after the war returned to law practice in New York City.

As a child, Arthur attended Baptist churches. His father, William, was an immigrant Baptist preacher from Ireland. A committed abolitionist, William pastored a number of churches in Vermont and New York while Chester, his oldest son, was young.

During the time in Arthur’s life while his father was pastoring the Baptist church in Perry, New York, a prophecy was made that Chester would one day be president of the United States:

He first attended the Baptist church in Perry, the pastor there being “Elder Arthur”, father of Chester A. Arthur. The latter was then a little boy, and Mr. Webster, once calling at his house, put upon his head of the lad, remarked, “this little boy may yet be President of the United States.” Years after, calling at the White House, he related the circumstances to President Arthur, who replied that he well remembered the incident although the name of the man who thus predicted his future had long since passed from his memory; then standing up he added. “You may place your hand upon my head again.”