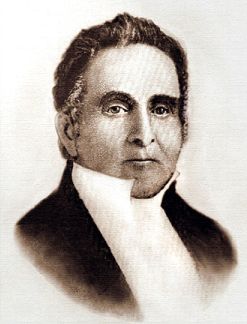 From today’s Richmond Times Dispatch, “A Matter of Prophecy“:

Elder Pratt preached in Boston, on Sunday, on the doctrines and practices of the Mormon Church.–The prophet said there was to be a downfall of nations, beginning with the rebellion of South Carolina, as has been revealed to Joe Smith twenty-eight years ago, but the Saints would be gathered together and saved. There are about 100 Mormons in and around Boston.

Mormonism, a unique American-born religion, was birthed in the midst of the revivalist fervor that spread throughout upstate New York in the 1820s. During the 1830s, as the new religion gained traction, some Baptists converted to Mormonism. One Baptist convert was Sidney Rigdon (illustration), the former pastor of the First Baptist Church of Pittsburgh, Pennsylvania.

Rigdon became enamored of Smith’s claims of a restored church and led a large contingent of his then-Ohio congregation into the Mormon Church. Many considered him the first theologian of the Mormon Church. Others attributed even greater significance to his role in the founding of Mormonism: in 1891, Baptist historian and Southern Baptist Theological Seminary professor William H. Whitsitt finished a (yet unpublished) manuscript entitled, Sidney Rigdon, The Real Founder of Mormonism.

Rigdon, however, split from Smith in 1845 and organized a competing Mormon church. His new denomination quickly faltered, and by the Civil War era the former Baptist minister is living in relative obscurity.

During the war years Mormonism continues to make inroads among Baptists and other Christian denominations in the Northern states at large. Within the armies some Baptists, for the first time, encounter Mormons face-to-face.