As publicly and repeatedly affirmed by both North and South, slavery is the cause of the present Civil War, preceded in 1845 by the creation of the Southern Baptist Convention in defense of African slavery as God’s will.

Now, more and more slaves are taking emancipation into their own hands, fleeing their masters and seeking freedom beyond Union lines. Southern Baptist leaders, having long insisted that African slaves are blessed by their lot in life and happy as slaves, will spend the remainder of the war repeating the same mantra.

Yet the northern public is increasingly uneasy about the evil of slavery, and today’s edition of Harper’s Weekly publishes a print picturing a southern slave auction. Pictured are wealthy white southern men bidding on African slaves. Black families are being ripped apart in order that wealthy white slaveholders may live a life of luxury and pad their pocketbooks. Images such as this sear the conscious of many northerners, including Baptists. 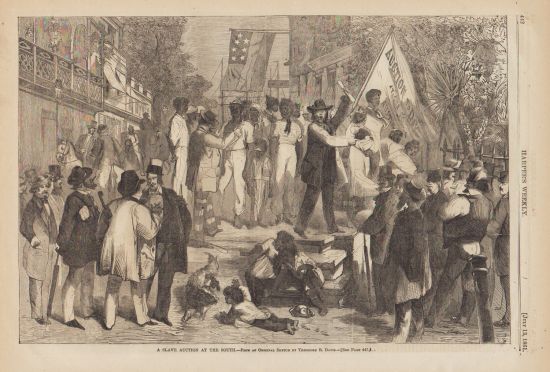