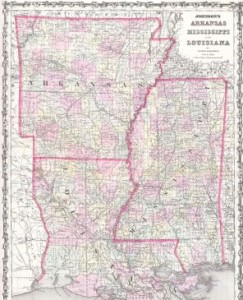 Readers of today’s Little Rock Daily State Journal learn more details of a “Conspiracy in the Northwest” portion of the state that for weeks has elicited much excitement and concern.

Throughout the Confederacy, pockets of Unionism remain, especially in mountainous regions. Often under the name of “Peace” societies or “Peace and Constitutional” societies, these resistance movements exist in secret, quietly doing what they can to oppose the Confederacy and assist Union efforts. Several secret societies are operating in Arkansas’ Ouachita Mountains, in the counties of Montgomery, Pike, Polk and Van Buren. The unofficial leader of these movements is Pike County’s Samuel “Preacher” Kelley, a Baptist preacher and one of five state delegates who had originally voted against secession at the Secession Convention.

Originally from Illinois, Kelley is a Free Will Baptist. His denial of the Calvinistic doctrine of the “perseverance of the saints” makes him at odds with most Baptists in the South. His Union sentiments, however, ensure that he is viewed by many as an enemy of the South.

Since the arrival of the prisoners from Van Buren county, and for some days previous to their arrival, the subject of that traitorous conspiracy has enlisted the attention of our law abiding community. We regret exceedingly to chronicle the fact that such a state of affairs exists in the Northern portion of the State, but as they are realities which we are compelled to meet, we should meet them like men, regardless of the consequences. Davie Crocket’s motto “Know you are right and go ahead” should be our watchword. It is true that prudence and forethought should characterize all our actions relating to the administration of Government, but a firm and unyielding policy should be pursued in regard to citizens guilty of the high crime of treason against their government. If the prisoners are charged with robery [sic], or offences against the civil authorities, then the civil authorities where the crime was committed should hold them responsible. If on the other hand, they are charged with conspiracy against the government, (which we learn is the case, then of course, they will be held to account by the Confederate Court at Little Rock.)

Our authorities have the example of the East Tennesseans before them. Clemency was exercised toward them. The strong arm of the law was withheld by the executive and now we have our reward in the burning of bridges, the interruption of travel along the most important railroad in the Confederacy, and scattered camps of enemies in nearly every county in that section. Perhaps our neighbors in Van Buren and Searcy counties have never intended anything as formidable as the miscreants of East Tennessee. Their designs are however treasonable, their association cherished no kind of feelings toward the constituted authorities, and they were in communication with persons at the north. Justice administered to those taken will have a most salutary effect upon any, inclined hereafter to engage in such an enterprise. It seems they have fallen in love with Lincoln’s heresy that a county has as much right to secede from a State as a State from the Union, and we think their minds should soon be disburdened of any such crude ideas. It appears that information of this organization was given to Gen. Burgevin by a citizen of Van Buren county, and a volunteer in the Confederate service. The names of the leaders are well known, and if those who are in hot pursuit of them ever succeed in overtaking them ‘twould be well to acquaint them with some of the peculiar uses of hemp.

We have been permitted to peruse the constitution of this organization. It is called a “Peace and Constitutional Society.” They have 700 members in Searcy, Van Buren, Newton and Izard counties—and 1700 in the whole State. They have a regular system of signs and passwords and are furnished with supplies of money from the Northern camps. The constitution makes it obligatory upon every member to hazard his life in aid of another in distress, and the penalty of expressing any of the secrets of the organization is death. Gen. Burgevin, who was mustering in a regiment at Carrollton, as soon as he heard of the conspiracy, at once hurried down to the counties above named to take such steps as might be necessary. At Clinton, he saw Colonel Jerome B. Lewis, who assured him of the correctness of the report. Col. Lewis had called out a guard of 100 men and was at that time making arrests, and Gen. Bargevin “being satisfied from his well-known energy of character and fearless nature, that the matter was in good hands,” left the control of the whole affair with that officer. Col. Lewis reports that those already taken were well supplied with arms and ammunition and infers that those still at large are equally well equipped. General Burgevin reports further to the authorities in reference to the disaffection of the people in that section, and gives the names of certain individuals engaged in fomenting discontent among them.

Those who have been taken acknowledge their crime, plead nothing extenuating, but only beg for their lives. Our authorities, however, are fully informed upon the whole subject, and we hope, if necessary, the extremest measures will be resorted to in order to suppress all treason, and secure to the people immunities from civil war in their midst.

Two weeks later, Kelley’s complicity is disclosed to the public, and he is scorned by the press as a “fanatical old free-will Baptist preacher” leading a band of “hoary headed old sinners”:

Seventy-seven additional prisoners were brought in yesterday from the county of Searcy, being a part of that gang of jayhawkers or conspirators whose nest was first discovered and broken up in Van Buren county a few weeks ago. This foul conspiracy which was the work of a fanatical old free-will Baptist preacher, aided by a few hoary headed old sinners, who have been long living in crime and wickedness among the barrens of our northern border counties, has been thoroughly broken up by the vigilance and prompt action of the loyal citizens of those counties.

One of the most lamentable features connected with its development and discovery is the fact that a great many good, but simple minded young men, were seduced and deceived by those wicked old sinners, into a crime which they now sadly, but perhaps too late, lament. The law will be rigidly enforced against them, and, in all probability, the neck of the last one of them will swing by the halter, as a warning to all future traitors and conspirators.

Nonetheless, secret Union societies continue to exist in the South throughout the war. For his part, Kelley’s ignominy does not deter his ministry. Following the war, he founds Philippi Missionary Baptist Church in western Hot Spring County. A few years later, Kelley’s church becomes a Church of Christ congregation.